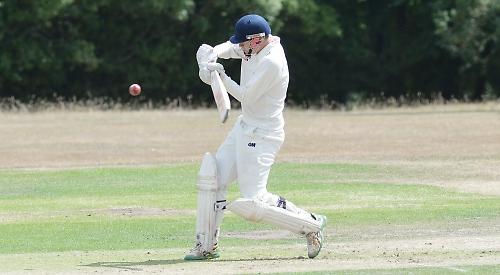 Harpsden skipper Ben Hancock won the toss and elected to bowl on a breezy and overcast day. This decision proved the right one for the hosts as Tom Hancock trapped Ford plumb in front with the second ball of the innings.

Peterson and Thompson set about rebuilding the innings, pouncing on any loose deliveries and making use of the rapid outfield. The introduction of Jamies Paice and Abdul Khaliq (4-20) put the brakes on the scoring, as Harpsden built pressure on the batsmen as Peterson played a loose drive straight to Adam Birkett at cover.

From this point on, Harpsden seized control, with Paice and Khaliq continuing to bowl well as they picked up three and four wickets respectively to leave Ley Hill in deep trouble at 114-8. Any hope of the tail wagging was quickly extinguished as the returning Ben Hancock picked up the final two wickets in consecutive balls to leave Ley Hill 119 all out.

Harpsden openers Birkett and Ben Watson set about chasing down the total with great confidence as both batsmen put away any loose deliveries as they put on 59 before Watson was bowled by Thompson. Birkett fell soon after as he was adjudged lbw for 25.

Skipper Hancock joined Stevens at the crease as both batsmen negotiated a tricky period up until tea, with Harpsden 68-2 they were in the box seat.

After tea Hancock started to up the scoring rate but when he was run out with the score on 89, Harpsden suffered a collapse, as they soon found themselves 96-6 and requiring calm heads in the middle. This came in the form of John Griffiths and Jonny Wright as they safely guided Harpsden home to a four-wicket win.

This win cements Harpsden’s place in second in the league but it will require a perfect record from here on in to stand any chance of catching league leaders Chalfont St Giles.

Elsewhere in the division PEPPARD STOKE ROW skipper Richard Ashton believes his side are just one win from safety after they overcame visitors PENN AND TYLERS GREEN by 96 runs. After enduring a 128-run pasting in Buckinghamshire earlier in the season, Peppard Stoke Row were asked to bat at the Les Clark Oval only for Don Townsin and debutant Mark Price (20) to put on 41 for the opening wicket.

George Lee (20) hit a number of impressive shots before he was caught and bowled by Lance for 20, and when Hughes enacted the same form of dismissal against Scott Harris before grabbing Dan Hayden (24) at second slip, the hosts were wobbling on 124-5.

Ashton and Sam Fooks put on 43 for the sixth wicket until the former edged to Hughes at first slip, but a brilliant partnership between Fooks (55 not out) and Alfie Clifton (32) enabled the hosts to reach 230-8 in their 52 overs.

Harris struck with the first ball of the reply as an inswinger accounted for Chris Yates, and he then had Nick Barber trapped lbw before John Shaw followed via the same method to Fooks.

Harris claimed his fourth when Jake Wilson edged one to Ashton at slip, and on the stroke of drinks the bowler claimed the key wicket of Hughes (33) lbw.

Connor Haumann was bowled as Harris (6-50 off 15 overs) continued to do the business, and with Clifton (2-13) and Dion Sampson (1-14 off seven) also bowling well, Penn were eventually dismissed for 134. The result leaves Peppard Stoke Row requiring 39 points from their last five games to ensure survival and Ashton said: “This really is a remarkable season. With the number of guys we lost in the off-season, I genuinely didn’t expect us to win a game all year unless Dan (Hayden) or Alfie (Clifton) did something ridiculous with bat or ball.

“However, we’ve gradually acquired players and with team spirit as it is, we’ve had tremendous fun and may yet pull off the greatest of great escapes. We’ll keep trying to find a way.”