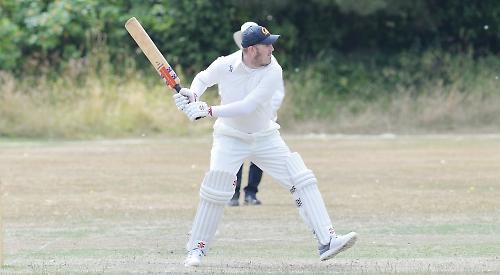 HENLEY 3rds’ 15-year-old bowler Jonny Trist finished with remarkable figures of 9-65 as his side recorded their second Division 4A win of the season as they defeated READING 2nds by 25 runs at Nettlebed.

Henley won the toss and elected to bat. Openers Hester and Connell batted defensively in the face of some tight bowling, scoring only 13 runs from the first nine overs.

Once the breakthrough came wickets fell at regular intervals and when Connell was dismissed for 41, Henley were left at 78-7. David Pattinson showed good fight on his debut to score 15 not out, but at 99-9 Henley were in real trouble. Batting at 11, Trist played with confidence and flair to strike an important 27 to leave Henley 135 all out.

In response, Henley took the old ball, opening with spinners Trist and Alex Johnson. While Johnson restricted the runs from one end, allowing only 14 runs from nine overs, Reading had no answer to Trist’s off-spin.

Bowling with a maturity beyond his years, the batsman came and went as Trist bowled with outstanding accuracy, flight and spin, at times turning the ball square.

A lower order fightback left Reading at 110-9, but a fine catch in the deep by Johnson, holding on to a ball that would for gone for six, secured Henley victory.

Trist, who set a new Henley club bowling record, took his nine-wicket haul in 18.1 overs with the other wicket being a run out.

Speaking on Trist’s performance after the match, Henley skipper John Neville said: “It was an absolutely stunning performance. Jonny bowled with superb skill and accuracy to dismantle a second team.

“At only 15, this is a remarkable achievement and one that will live long in the memory. I was delighted with the result in such a crucially important local derby, which given the context of the game, makes Jonny’s performance even more special.

“After a tough first half of the season we have now won two games out of three and I hope we can carry that momentum into Saturday which is another massive game against fellow relegation candidates Bagshot. I have every confidence we can secure safety by the end of the season.”

HENLEY 2nds had to settle for a draw in their bottom-of-the-table clash at basement side READING. Batting first Henley posted 235-8 with Nathan Hopkins top scoring with 70.

In reply the hosts held on to final two wickets as they closed on 221-8.

Henley picked up 14 league points from the match as opposed to Reading’s nine.

KIDMORE END held on to draw their home Division 2A match with MAIDENHEAD AND BRAY.

The visitors won the toss and elected to bat on a flat pitch. Despite some good bowling from opening seam bowler Mike Jones and spinner Alex Crawford runs flowed.

The score was 40 when keeper Leonard caught the first wicket off a sharply turning ball from Alex Crawford. Grey and Philips-Williams then proceeded to bat well and capitalised on poor bowling, making Kidmore pay for anything loose, as they took the score to 116.

The Kidmore bowlers were struggling to control their line and length when the wind was gusting hard, but not always in the same direction. The score raced to 147 before the third wicket fell to Guy Ashby who was getting to grips with the conditions. It did not take long for Yunus Sert to take the score to 210 — he was eventually out for 42 from 44 balls.

Ashby and Crawford clawed Kidmore back into the game with accurate bowling. In the last 10 overs of the innings Maidenhead and Bray were only able to move the score from 210 to 246. During this spell Ashby (3-72) and Crawford took three wickets. This meant Kidmore required 246 from 48 overs to win.

The visitors started with the old ball and two spinners. With the ball turning sharply and aggressive fields set it was a tough start. Easton fell early for 6 to Yert before Leach also fell to a sharply turning ball from Yert. Before Leach was out he scored a quickfire 23 from 20 balls striking a number of boundaries, Leonard replaced him but also fell to Yert. This brought Ashby and Frost together, with the score on 43-3. Frost and Ashby attempted to rebuild the innings, although this was not always easy with the spinners turning the ball significantly. Ashby swept well and struck the ball through the off side on the back foot while Frost accumulated his runs watchfully.

As the visitors became frustrated with the pair they took the new ball. The harder ball with attacking fields saw a sharp rise in the run rate as both batsmen drove through the covers. Eventually the pair began to dominate the bowlers and this resulted in the spinners’ return.

Once again this slowed the run rate. Frost passed 50 before he was dismissed as the game entered the last 12 overs. He scored 55 from 121 balls striking nine boundaries. Together Ashby and Frost put on 102.

A collapse then followed as the incoming batsmen found the spin bowlers hard to play. The score went from 145-4 to 146-6 as Crawford and Tom Sheldon fell cheaply.

Bodeker came in and played some shots despite the rising required run rate. When Ashby fell for 44 from 78 balls, to Blackwell, Kidmore End were on the ropes.

The tail end fought bravely, but wickets kept falling. With two overs to go, Maidenhead and Bray needed two wickets. Faroqi fell, bringing Mike Jones to the crease. He had to survive two balls from the spin of Yert. The two balls were not without drama, the ball missed the stumps narrowly and then was nearly played on, but Jones survived.

Jeff Sheldon once again stonewalled the last over and Kidmore drew. Yert finished with figures of 20-6-33-7 as Kidmore End closed on 176-9.

WARGRAVE moved up to third place in Division 2B thanks to a four wicket win at basement side WOKINGHAM 2nds.

Batting first the hosts were bowled out for 129 with Martin Smith taking 4-10 and Mark Firth 3-34. In reply Wargrave eased to 130-6 with Will Allum top scoring with 38.

WARGRAVE 2nds maintained their Division 5B promotion push with a one wicket win at EVERSLEY 2nds.

In Division 7A KIDMORE END 2nds went down to a three-wicket defeat at league leaders FLEET 2nds.

Having been inserted on a pitch which showed signs of being affected by the overnight rain Kidmore started brightly as Chris Pigden and Mark New put on 30 for the first wicket before Pigden’s dismissal.

New was joined by Luke Sinclair and the score moved on to 98 before New was out lbw for 40. Sinclair dominated the Kidmore innings as his 76 was the backbone of the Kidmore total and he received some good support from Gregor Hearn (20) and Azhar Udeen (21), but Kidmore were bowled out for 201 in the 49th over as the visitors succumbed to the leg spin of David Hilditch who took six wickets.

In reply the Fleet innings mirrored that of Kidmore as they also lost their first wicket at 30 and Kidmore’s bowlers stuck to their task well and bowled a good line and length which made run scoring difficult for the home side. Azhar Udeen, James Walker, Hamish McNaught and Jonny Abbot all put in good spells. Udeen collected four wickets, McNaught’s off spin was also challenging for the home batsmen and at 170-8 the game was in the balance with a victory for both sides possible.

James Martin’s 71 not out and a quickfire 28 from David Hilditch saw Fleet victorious with 11 balls to spare.

WARGRAVE 3rds maintained their Division 8A promotion push thanks to an eight-wicket win at home against SONNING 3rds.

Batting first Sonning were bowled out for just 88 runs with Kevin Raply taking 5-12. In reply Wargrave eased to 89-2 with James Newton hitting 37 not out.

KIDMORE END 3rds picked up 20 points from their Division 9A clash with WINDSOR 3rds as the hosts forfeited the fixture.