Debutant Zamman hits half-century to keep side on track 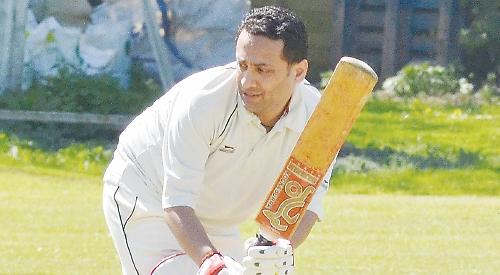 THE flaws in HURLEY’S batting were compounded by crucial dropped catches to deliver their third successive Premier Division defeat at home to PINKNEYS GREEN last Sunday.

Much cooler conditions saw Hurley asked to bat having suffered another week of availability crisis. Pat Hinnell became the first of three victims to lbw from the away umpire as he went to glance his first ball to leg and was sent back to the pavilion.

Naeem Akhtar and Vik Bhagwani added 52 with Bhagwani slapping his first ball to the cover boundary. Bhagwani was then cut down lbw by Umar Akhtar.

Hurley then lost four wickets in as many overs to slip from 53-1 to 64-5. Ian Dawkins and nephew Chris Dawkins added 40 to calm the innings before the switch to Ahmeed clipped the top of Chris Dawkin’s middle stump.

Ian Dawkins was just getting into form before falling to Ben Snapes. Ridgeway was the third lbw as Hurley stuttered on 132-9. A lively last wicket stand of 54 between Mike Cole and Mike Walton completed a disappointing display as the home side were dismissed for 186.

Hurley’s experiment with the old ball and spin lasted six overs and the new ball was taken in the ninth. Naeem Akhtar responded removing Purchase and Tiko in the same over.

Ollie Dawkins generated impressive pace removing Stemp and Patel in the 14th over. Hurley then found themselves unable to shift Rafiq and Stokes who added 94 in 17 overs but things might have been different if Stokes had been taken first ball behind and Rafiq dropped on 0 and 7.

Rafiq finally fell swinging Ridgeway to long off with Pinkneys all but home on 141-5. Stokes completed an impressive half century as Pinkneys strolled to a five wicket win with seven overs to spare.

HURLEY 2nds maintained their Division 3 promotion push as they ran out winners at EMMBROOK AND BEARWOOD 2nds.

Skipper Steve Taylor called correctly and inserted the opposition into bat. Opening bowlers Umar Zamman and Abdullah Ali accounted for the Emmbrook openers leaving them at 28-2.

First change bowler Jabbar was only able to complete an over before breaking down and nine bowlers were used in total to attempt to break the 106 run third wicket partnership between Mead and Williams.

Despite dropped catches and mis-fields on the parched bumpy outfield, heads never dropped. Owais finally made the breakthrough and despite a fourth wicket partnership of 45, once Mead was bowled on 96 at 179-4, regular wickets were taken and the hosts stumbled to 221-9 off 47 overs. Wickets were shared around with Liam Cole and Steve Taylor picking up one apiece.

After the break Abdullah and Greg Double strode to the crease. Scoring proved difficult early on and Double was bowled for nine attempting to move the score on. After a brief flurry from Yasir Gul and the loss of his son Hassan, Hurley were 41-3 after 17 overs. With only 43 overs to bat Jabber blazed his way to 61 off just 27 balls in a partnership of 75 with Abdullah.

This put Hurley back in the hunt and Umar Zamman continued the onslaught against a visibly tiring attack. He and Abdullah put on a further 72 runs and when Abdullah was finally out caught for 57, 34 runs were needed from five overs.

Skipper Steve Taylor joined Zamman and together they knocked off the runs in the 42nd over with an off drive from Zamman taking Hurley over the line. Zamman finished on 54 not out on his debut performance with Taylor on 19 not out.