Morris and Brock guide home side to gritty victory 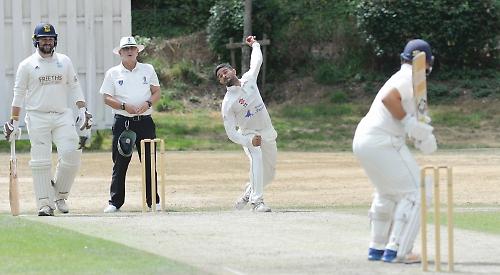 HAVING lost to OXFORD earlier in the season, HENLEY exacted their revenge with a solid and hard-fought five-wicket victory at the Brakspear Ground last Saturday.

Having bowled Oxford out for 176 on a deteriorating wicket, Henley bounced back from 110-5 to chase the score down with overs to spare. The victory keeps Henley well in the hunt for the Home Counties Premier League title, as the league approaches five exciting weeks of predominantly 50 over cricket.

After weeks of dry and hot weather, Saturday proved to be one of the coldest and windiest days of the summer so far. With a dry and potentially tired wicket, bowling first was not necessarily the obvious decision despite both sides’ respective league positions at either end of the table.

Having won the toss, Henley skipper Michael Roberts chose to trust his batting unit and sent Oxford in. The away team’s innings started steadily enough, with Tong-Jones and Dickinson providing a good test for Nugent and Afridi.

Nugent soon struck as Dickinson could only edge a wild drive to be caught one-handed at first slip by Matthew Rowe. The dismissal slowed Oxford’s run rate substantially and the introduction of spin quickly brought about the dismissal of Tong-Jones, who in an attempt to get on with it, ended up being stumped by Williams off the bowling of Singh.

Oxford skipper Perkins was then joined by overseas player Ayub and both players slowly rebuilt the Oxford innings, passing the 100 mark before the former was dismissed by Woods on the stroke of lunch, leaving the away side 128-3 at the interval. On the resumption of play Oxford’s innings quickly descended into a collapse. Once Ayub was trapped lbw by Brock, Oxford’s top-heavy line-up became exposed as Nutt, Mendis and Crosby all departed within the space of four runs.

Having already taken three wickets, Brock quickly removed Murphy and Musk to bag his first five-wicket haul of the season before Woods quickly brought the Oxford innings to a close by bowling the combative Freddie Simon for 21.

Although 176 did not reflect the start the away side had managed, it did reflect a pitch which was slowly becoming more and more tricky to bat on.

Despite this, Henley’s innings started well as Rowe quickly got into his work, dispatching both paceman Murphy and spinner Mendis to the boundary with impressive regularity. However, his innings was brought to a disappointingly early end, as he was trapped lbw by Mendis for 18.

Rowe’s dismissal brought Woods to the crease who, along with his captain, began to create a strong partnership as both weathered the spin well whilst simultaneously picking off any scoring opportunities.

By this stage, both Humphries and Mendis were turning the ball impressively, and apart from a brief burst from seamer Musk, spin dominated proceedings. Just as he was looking set, Woods failed to execute a pull off Mendis to be bowled for 30. Worse was to come as Roberts and Williams were both well stumped by Dickinson off Humphries in the same over, before Barnes nicked the same bowler to slip on the stroke of tea to leave Henley on 110-5 at the break.

At this stage the game was in the balance and with the wicket continuing to turn, it was going to take some grit for Henley to get over the line.

Fortunately Richard Morris and Euan Brock showed the kind of spirit which will make Henley a tough match over the last five weeks of the season. With Morris taking the role of aggressor, and Brock ably supporting through strike-rotation and the occasional boundary, the fifth-wicket partnership managed to quell Oxford’s threat through a combination of sound technique and poised decision-making.

The required score gradually reduced along with Oxford’s hope of a shock victory and despite some extravagant turn generated by both the visitors’ spinners, the Henley pair were able to hold firm and close the game out with nine overs to spare. The victory was an important one as it means Henley remain in striking distance of both Slough and Aston Rowant who sit first and second respectively. With one last declaration fixture against Finchampstead to come before the return of the 50/50 format, Henley will be confident of a strong points haul in the remaining games to give them a fighting chance of defending their title.

Skipper Roberts emphasised the need to focus on each game. He said: “We had a great win today and we’ll certainly take a lot of positives away. However we’re aware of the work yet to come and we will need to take each week’s practice and each game as they come to ensure we stay focused on what we can influence [on the league].

“It will be a good game at Finchampstead next week, and we’re excited for the challenge they’ll bring.”