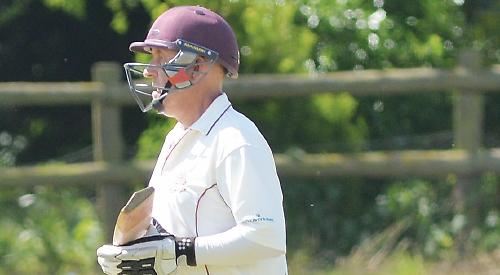 HURLEY and visitors FLEET STREET STROLLERS battled out a draw on Sunday in a match that consisted of 485 runs for the loss of just six wickets.

The home side lost the toss and were asked to field first in the heat. Strollers’ openers Jono Addis and Mike Loan enjoyed an opening partnership of 140 as all the Hurley bowlers were put under the cosh.

With no chances coming the way of the fielders it was a surprise when Addis feathered an edge off left-arm seamer Mark Allen which was gratefully accepted by Mike Walton behind the wicket.

The loss of his opening partner did not deter Loan, who together with Blair Travis added another century partnership in 14 overs. Travis eventually fell to the Walton double act, giving Dave Walton the wicket. With 268 on the board, Addis declared.

Pat Hinnell opened the Hurley innings with Imran Mazood. Having hit his third delivery down the ground for a maximum, Mazood then stepped out of his crease chasing a wide, seemingly oblivious to the fact that the keeper was up to the stumps and suffered the inevitable consequence.

Yasir Gul got himself run out and Andleeb Imran tried a massive heave, losing his off stump to Pete Wood and at 18-3 a Hurley collapse looked on the cards. This was averted as Josh Cole set a career best 74 in a partnership of 104 with Hinnell to steady the Hurley ship.

Cole was heading towards a century when he edged a delivery from Simon Brodbeck on to his stumps. At 126-4 Strollers sensed a chance to force a victory but with the resolute Hinnell joined by Hurley’s leading batsman Phil Ridgeway, it was not to be.

Ridgeway reached hit half-century and Hinnell finished on 45 not out as the match ended with Hurley on 217-4 and honours even.