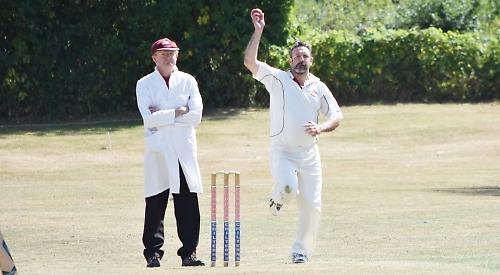 HURLEY held on to secure a draw against DOWNLEY in their Premier Division clash at Shepherds Lane last Saturday.

The visitors rattled up 302-9 in their full 47 overs making full use of the hard fast outfield and good wicket. An early wicket to Imran Arshad (2-51) as Dave Stone (12) edged behind proved another false dawn as two big partnerships took the match away from Hurley.

Arshad broke the second wicket stand of 62 with an away swinging delivery that took the off stump. Aaron Brown and M Paveen added 98 in 13 overs to prove the one big partnership that has dogged Hurley in recent weeks.

Paveen was trapped lbw by Jonathan Langlands as Hurley took three wickets in five overs. Phil Ridgeway removed Brown stumped by Walton, and U Ali skied back to Langlands. Raj Ali and Ben Hughes set about a wilting Hurley as the visitors hit 100 off the last 12 overs. Ollie Dawkins was unlucky to return wicketless giving keeper Mike Walton hot work behind the stumps.

In reply Akhtar and Arshad coasted to an opening stand of 76 in 20 overs. Hurley then almost gave it away as Akhtar and Arshad were bowled by Willans to lazy shots, Fernando was bowled, Langlands charged Brown and was stumped and Ollie Dawkins hit to mid-on.

Hurley were 84-5 losing four wickets in as many overs. Ameer Ahmed and Chris Dawkins both batted with surety to add 46 and push Hurley to 130 in nine overs.

Ahmed showed good application but was bowled by Brown as Hurley slipped to 148-8 after 38 overs. Chris Dawkins showed promise.

Ridgeway and Tim Golabek saw out a further three overs before the Belgian was trapped lbw. The experiended Ridgeway and Mike Walton then saw out the final 17 balls as Hurley escaped with a one-sided draw at 170-9.

HARPSDEN 2nds continued their impressive mid-season form in Division 1 with an eight-wicket win at home against LITTLE MARLOW on Saturday.

The visitors won the toss and elected to bat on a good pitch to bat on given the weather conditions. The decision to bat first was further vindicated as Harpsden struggled to find any real rhythm from their bowlers, with anything overpitched racing away to the boundary.

Both openers put on an opening stand of more than 50 at a steady run rate with Mahmood and Yaqoob scoring freely. This partnership was eventually broken by Gulfraz who trapped Mahmood lbw with his first ball for 29.

Yaqoob and new batsman Rashid continued to score freely as Little Marlow moved on to 126-1 before James Moore turned the tide in Harpsden’s favour removing dangerman Yaqoob for 69 and in his next over removed Rashid with a smart catch from Stanley.

From this moment on Harpsden, despite the extreme weather conditions, kept taking wickets at regular intervals with Stevens taking 4-37 from nine overs reducing Little Marlow to 212-8 off 47 overs.

Harpsden’s response to this target got off to the worst possible start when Raja was caught at slip in the third over leaving Harpsden 4-1.

Debutant Paul Smith was joined at the crease by Ian Brown and both went about rebuilding the Harpsden innings by punishing anything too full or straight.

Brown was the aggressor of the two and played some good shots down the ground. Brown and Smith put on 175 before Brown was bowled for a brilliant 80. Smith and Burgess continued to score freely with Harpsden winning by eight wickets and Smith carrying his bat for 89 not out. The win lifted Harpsden to third in the table.

HURLEY 2nds drew their Division 3 clash at AMERLEE in a match that saw almost 600 runs scored as they came within three runs of victory.

The visitors, who had just 10 men, lost the toss and were put into field first.

After hasty introductions to the new opening bowlers Hurley opened with debutants Imran and Azim. The outfield was lightning fast and soon it became apparent that this was going to be a long hot day in the field.

An opening partnership of 113 from Cooper and Etheridge put the Hurley bowlers to the sword and once again dropped catches proved costly.

The introduction of Raheem Dad and Dave Walton pegged back the run rate and constant bowling changes kept the batsmen guessing. An impressive 94 not out by D’Costa ensured an early declaration at 299-6 after 40 overs but not before Liam Cole and Fiyyaz Mahmood had combined to earn three bowling points for the visitors.

In reply Yasir Gul was an early casualty getting a leading edge off Sharrington which brought Steve Taylor to join Abdullah. They were relatively untroubled in a partnership of 64 and boundaries came easily before Taylor fell to a catch on the boundary.

This brought in Raheem Dad to join Abdullah and they plundered the AmerLee bowling with a partnership of 135. The tiring Abdullah was stumped after reaching his century and his innings of 107 put Hurley back in the box seat.

With two AmerLee bowlers having to be taken off for dangerous bowling, the chase was on and the rate required hovered around eight an over as Azim, Imran and the experienced Mike Cole partnered Dad through the final overs.

With 11 required off the last over, Cole plundered a boundary before being stumped which brought Dave Walton to the crease with seven needed off two balls. His first ball was pulled behind square for four but he was unable to lay a bat on the final delivery leaving Hurley at 297-6.