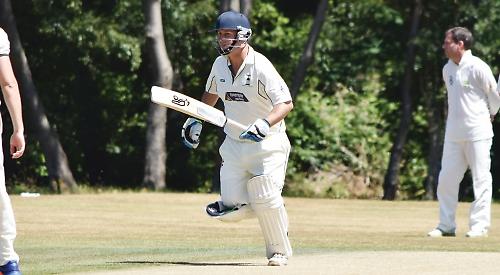 HARPSDEN kept the pressure on league leaders Chalfont St Giles as they triumphed at CROWTHORNE AND CROWN WOOD last Saturday.

Home skipper Avrili won the toss and elected to bat on a dusty wicket. The Crowthorne opening batsmen started well, with Barron playing several strokes through the on side.

Wright had his partner Davies caught for 4 and struck again a couple of overs later, dismissing the home captain for 17.

Barron was then removed by Tom Hancock for 29 and the away side began to build the pressure on the Crowthorne middle order. James Paice was introduced and bowled tightly, eventually eliciting the mistake from Brundish, taking a smart return catch and dismissing the wicketkeeper for 18. The seamer then had O’Laughlin caught behind for 31, sparking a flurry of wickets at the other end.

John Griffiths trapped Lankala lbw for 1 as Harpsden skipper Ben Hancock brought back his opening bowlers in an effort to clean up the tail. Both Wright and Tom Hancock duly answered the call, pitching in with two wickets apiece, having Pun caught at mid off before a smart piece of work behind the stumps saw Vogel stumped by Will Ward off the bowling of Wright. Alam and Chandram followed shortly after as Crowthorne were bowled out for 138.

The Harpsden innings got off to a shaky start, with both openers Sam Imlay and Adam Birkett falling victim to some tight opening bowling from O’Laughlin, the seamer taking advantage of some variable bounce in the wearing wicket and having both batsmen caught driving in the covers.

Stef Franklin and Wright set about building a partnership and the pair put on 50 for the third wicket before Franklin became the next victim of the undulating pitch, being caught at silly mid on for 28.

Wright took it upon himself to up the scoring rate and the all-rounder played several fluid shots on the off side. The introduction of the leg spin of Davis proved to be his downfall, as he was caught behind for 37.

Griffiths steadied the ship well, playing solidly in defence and rotating the strike well. Ben Hancock then departed, the skipper being stumped off the bowling of Davies. Tom Hancock (20 not out) joined Griffiths at the crease and provided the clinical finish the visiting team required, putting away the bad balls and getting Harpsden over the line inside 44 overs, Griffiths playing the anchor role and finishing on 29 not out.

PEPPARD STOKE ROW secured survival in the division with four-wicket win at WEST READING. On a scorching hot afternoon at Reading University, the hosts won the toss and unsurprisingly chose to bat, only for Scott Harris to bow Usman Tariq for a mere 11.

Adam Davidson (47) was still at the crease having opened and was unfortunate to be run out by Omer Khalid but the hard-hitting Khalid (63) and Hafeez Ul-Wahab (52) hit the Peppard Stoke Row attack around to end up on 251 all out.

The visitors’ reply started badly with Tariq and young Inshaf Akram reducing Peppard Stoke Row to 73-5, despite the best efforts of Senthil Muniyasamy who hit 27.

Jamie Sharrock (92 not out) and skipper Richard Ashton (91) then put on 177 for the sixth wicket with the latter recording his first half century for almost four years for the first team.

Ashton’s attempt to finish the match in style by slog sweeping Tariq with two to win led to his departure, but Fooks merely came to the crease and square drove his first ball for a couple to seal the victory and mathematical safety.