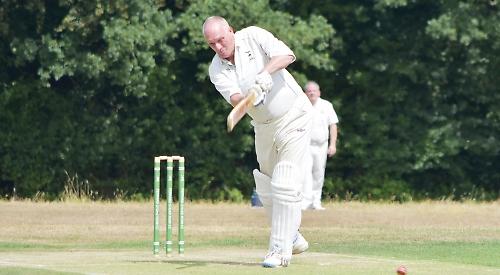 The Premier Division table-toppers elected to bat in hot, dry and dusty conditions at Scours Lane.

An opening partnership of 68 stood them in good stead when Ujwal Tikoo became the first of four victims for experienced spinner Errol Masters.

John Acland-Hood continued the good work finishing with 93 despite only hitting eight fours and there was valuable support from Amal Tyagi and Shanker Sundaresh as the visitors reached 246-7.

The start of the Ibis Mapledurham innings was disastrous for the home side who lost five wickets for 46 thanks to the accuracy and movement of Tony Breakspear who had 4-7 after his 10th over.

Peter Weston and Louis Hart staged a match saving recovery by putting on 110 in 24 overs.

Paceman Tyagi gave Checkendon a sniff of victory by clean bowling all his four victims but the last pair held out for a draw, 74 runs adrift.

Checkendon now need just 23 points to be assured of the league title.

WOODCOTE held on to secure a draw at GORING in their derby clash.

Goring won the toss and had no hesitation in electing to bat, which proved a good decision as openers Chris Winterbottom and Olly Carrier put on 168 and remained together until the 35th over.

After their dismissal, both victims for Ryan Van Heerden, who bowled an admirable spell of 2-44 in 12 overs, the Woodcote bowlers managed to contain the Goring batsmen effectively and take a further four wickets for 56 runs.

Paul Knox once again took on the responsibility of holding the Woodcote innings together and he had reasonable partnerships with JP Brouard and Mark Pearson, but defeat appeared inevitable when the ninth wicket fell with seven overs remaining.

However, Woodcote’s two most experienced players, Jonny Aldridge and Pete Roberts had other ideas holding out to steer the visitors to the draw.

In Division 1 PEPPARD STOKE ROW 2nds posted their highest ever league total on Saturday in a comprehensive win against visitors WEST READING 2nds.

The hosts opted to bat at Peppard Common having won the toss and openers Don Townsin and Dan Bacon had made good progress when the first wicket fell on 48 after eight overs. George Lee (69) and Nick Sedgwick (52) built further on this solid foundation in a 93-run partnership, with Sedgwick reaching his maiden Peppard Stoke Row half century in style. The middle order of Marcus Laing, Gerry Bacon, Josh Perkins and Danny May all ran well between the wickets to apply more pressure on a tiring West Reading attack, with Peppard Stoke Row scoring at more than five an over throughout the first 36 overs.

This enabled stand-in skipper Olly Nicholson to play freely and with some late cuts from Roy Hayden helped push the home side’s total to beyond 300. Olly Nicholson (53 not out) hit 24 off the 41st over and brought up his half century off just 23 balls as the home side posted a record 303-8 off their 45 overs.

West Reading’s reply was also free-scoring due to the flamboyance of two top order batsmen and they also found themselves on 48 after eight overs. Their fortunes changed when Josh Perkins took two wickets in two balls and with some good ground fielding and catching in the deep by Marcus Laing and Danny May the run rate grew.

After Marcus Laing enacted a run out and with 15 overs remaining the away side went looking for a draw. Peppard Stoke Row persevered and made regular bowling changes to capture the final three wickets, the last falling when West Reading’s number eight padded up to a full Josh Perkins delivery. This secured a resounding 104-run Peppard Stoke Row win with five overs to spare.

In Division 2 U15 Will Wakelam (55) made his first PEPPARD STOKE ROW 3rds half century albeit in a losing cause as home side lost to WOKINGHAM 6ths by eight wickets.

Useful contributions from Allan May (27), Hugh Asquith (23) and Matt Vines (21) helped Peppard Stoke Row to 185-7, but despite Owen Simmons’ 2-20, Wokingham reached their target two down, Chinmay Kulkarni scoring 84 not out and Steve Bendall 79 without being removed.