Johnson’s quick fire ton in vain as side fall short 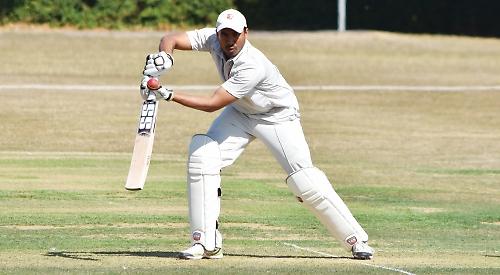 HENLEY 2nds were bowled out for just 33 runs as they crashed to an eight-wicket defeat at home against Division 1 promotion-chasing COVE on Saturday.

Batting first at the Brakspear Ground the hosts were in trouble early on as they lost both Tom Oldershaw and Will Legg who were dismissed for ducks. Opener Ziafat Ashraf top scored with 7 as Henley were dismissed in just 14.1 overs. Ranitha Liyanarchchi took six wickets for the visitors while Kazim Jaqvi the other four.

In reply Cove knocked off the required runs in 8.5 overs with 15-year-old Jonathan Trist, who starred for Henley 3rds last week by taking nine wickets, taking 2-6 on his debut as the visitors ended on 36-2. The result leaves Henley still second from bottom in the league, six points from safety.

In Division 2A KIDMORE END crashed to a seven-wicket defeat at EVERSLEY.

Having won the toss Kidmore End batted first and got off to a fast start as Alex Crawford sent the ball flying over the slips as Nibblet bowled short and aggressively in his opening spell. His batting parter Jeff Sheldon started with confidence but nicked off to the slips.

Crawford joined him in the pavilion shortly afterwards. Abid Ul Wahab took on the short pitched bowling and struck many boundaries hooking and pulling. He raced into the 40s but his innings was cut short by a good catch in the gulley. Leonard fell shortly afterwards as Eversley bowled a disciplined line.

This left Ashby and Frost to rebuild the innings. However, Ashby also fell caught in the slips, despite having looked good after some early cover drives.

Five wickets down, on a hot day Bodeker and Frost had to salvage a respectable total and gain as many points as possible. Bodeker made it look easy playing some elegant glances and silky back foot drives whilst Frost batted in a more dogmatic fashion.

The pair managed to increase the score significantly, before Tom Bodeker got a snorting delivery, from Stuart Lippo, it pitched outside leg-stump and rose sharply, jagging across his body to catch the edge. Frost batted on coaxing the tail in attempt to squeeze out as many batting points as possible. Batting selectively he managed to score 58 and get his team eight batting points as they passed 175.

Kidmore’s bowling was unable to exert pressure on Eversley without a large enough score to test the batsmen with run rate pressure. J Ford batted well, his shot selection was exemplary and he mixed watchfulness with attacking shots.

Ford never took a risk, attacking only poor balls, but he did so with confidence and control, never failing to capitalise on a bad ball.

Kidmore did manage to take three wickets, earning themselves a point that Thomas Wilkinson picked up as his first team wicket.

WARGRAVE bagged a narrow win despite a batting collapse in their Division 2B clash at BEACONSFIELD.

After electing to bat, Beaconsfield struggled to get the ball away and lost three early wickets against some tight Wargrave bowling from Jack Clark, Toby Greatwood and Kirk Graham, and including one to a neat direct throw run out by Will Allum.

David Heavyside and Harry Stephens rebuilt the innings and at 110-3 with both still at the crease, Beaconsfield looked to be in a reasonably strong position to kick on, but a fine delivery from Mandip Sohi who had just been brought into the attack, clipped Heavyside’s off stump to trigger a collapse.

From then on Wargrave rattled through the wickets bowing Beaconsfield out for 126 in 39 overs with Sohi ending up with figures of 4-9 and involving another direct throw run out, this time from Neal Robinson, and two wickets for Mark Firth. Wargrave reached 63-1 at the tea interval, seemingly on the way to a comfortable victory with Imran Malik and Mandip Sohi in control. Malik (26) was out shortly after tea, but it was the loss of Sohi (55) when the score was on 102-3 that sparked a collapse that saw five wickets go for just eight runs.

With nine wickets down and four runs to get, the game could have gone either way, but Jonathan Colbourne was able to hit the ball away to secure a one-wicket victory for Wargrave.

HENLEY 3rds went down to a 13-run defeat in their Division 4A relegation tussle at BAGSHOT 2nds.

Henley lost the toss and were asked to bowl. This was not a good toss to lose on a flat wicket and fast outfield as both Bagshot openers went on to score centuries, sharing an opening stand of 199 in 36 overs.

Henley’s bowlers toiled away in the heat without reward, until Rob Kenworthy took the only wicket of the innings, snaffling a sharp caught and bowled. Henley’s spinners restricted Bagshot in the latter stages and the hosts declared on 284-1.

Henley’s chase did not start well as they lost two wickets in their first three overs. Kenworthy and Stone set about rebuilding the innings, the former playing a number of cover drives in his 45-run innings. The duo both departed with the score on 78, which bought Alex Johnson to crease. In what was a fine innings playing shots all around the ground, he bought up his 100 in 83 balls, eventually departing for 125. This innings gave Henley a sniff of victory, but they entered the last over hoping for a draw, needing 14 runs to win but with only one wicket remaining. A Yorker first ball of the over was good enough to get through Harris-White’s defences with Henley finishing on 271 all out.

Despite Johnson’s knock, Henley need at least two wins in the final four games to stand any chance of survival.

Teenagers dominated with bat and ball in WARGRAVE 2nds’ Division 5B clash with FALKLAND 3rds as the hosts triumphed by 136 runs.

The innings was brought to an abrupt ending in the 48th over with Sunil Sharma taking four wickets in the last four balls and recording figures of 15-2-49-5. Wargrave finished on 216, with Arul Appavoo (25 not out) left stranded at the other end with four overs still left to bat.

Batting first the visitors were bowled out for 98 with Azhar Udeen taking 5-32 for the hosts.

After a rapid opening stand of 67 between youngsters Taran Sohi (43) and Sam Warren (16), WARGRAVE 3rds slumped badly and were bowled out for 151 in 31 overs in their Division 8A clash at ROYAL ASCOT 4ths.

Wargrave chipped away at Royal Ascot with three wickets for Kevin Rapley and two each for Scott Walker and Alex Hands, but Disney Abeyesekara (42) and Rob Phillips (36) did enough to ensure that Royal Ascot got over the line with two wickets to spare.

In Division 9A hosts KIDMORE END 3rds went down to a three-wicket defeat against EVERSLEY 4ths.

Batting first Todd Butler hit 80 while Ankur Raina 57 not out as Kidmore End closed on 209-6. In reply Evesley reached their target of 211-7 off 34.2 overs. Paul Lawson and Ali Baxter both took three wickets each for the hosts.