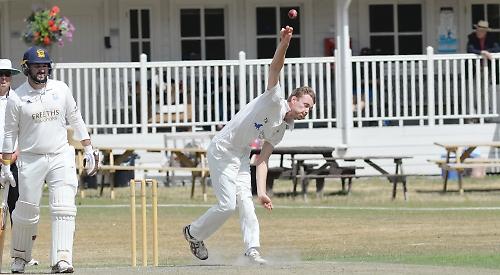 DEFENDING champions BERKSHIRE tightened their grip on the Western Division title race with a 320-run win over DEVON at Falkland CC this week.

They made it four wins in a row this season to move 19 points clear of second-placed Shropshire with two away fixtures remaining against Cheshire and Dorset.

Their victory, which they sealed early on Tuesday morning, means they have now gone four successive seasons without losing a home match in the championship.

Berkshire outplayed a young Devon side in all departments after skipper James Morris had won the toss on Sunday and elected to take first use of a good batting wicket.

Waqas Hussain led the run spree with a magnificent innings of 192, his highest for the county, producing a masterclass of attacking strokes. Occupying the crease for 286 minutes, the former Henley and Slough star faced 247 balls, striking two sixes and 21 fours.

He and 17-year-old Archie Carter put on 146 in 45 overs for the first wicket, with the Wokingham batsman hitting 53, his maiden half-century in the championship.

Hussain also featured in stands of 84 with Andy Rishton, who contributed 40, and 123 with Morris, who made a lively 76 off 62 balls, taking Berkshire to a highly respectable 90-over total of 424-7.

The Devon batsmen, however, never looked comfortable, crumbling from 40-2 to 78-8, eventually finishing with a very modest 103, Joe Hagan-Burt being his side’s top scorer with just 17. Tom Nugent, playing his first championship game of the season, took 4-42 off 12 overs and Chris Peploe 3-26 from 11.

Despite the 321-run lead, Berkshire opted not to enforce the follow-on and instead went looking for quick runs in the second innings to take the game well beyond the reach of the visitors.

Hussain was again their star performer, making 76 off 71 balls, while Morris contributed 31. Berkshire declared at 184-8 — seven wickets falling to spinner Jamie Stephens — to set the visitors an impossible 506 to win.

To their credit, the West Countrymen’s top order batted with more determination and concentration than they had earlier in the game, reaching 98 in 27 overs before losing their first wicket.

But the departure of openers Josh Mailling (58) and George Allen (44) in quick succession, both dismissed by Peploe, triggered off something of a collapse to 152-5. They finished the second day on 180-7 and it took Berkshire just 14 balls to polish off the tailenders on Tuesday morning, Devon being all out for 185.

Peploe, now past the 200-wicket mark in championship games for the county, secured another five-wicket haul for impressive match figures of 8-89, while fellow spinner and Datchet team-mate Ollie Birts claimed 4-55 in the second innings.

Berkshire’s next fixture is against Cheshire at Boughton Hall CC on August 19 to 21.