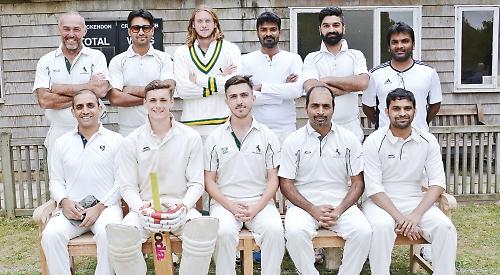 CHECKENDON wrapped up the Premier Division title thanks to a 107-run home win against SANDHURST last Saturday.

The hosts’ unbeaten run appeared under threat after they were put into bat and lost three early wickets.

Sam Arrowsmith and Amal Tyagi added 59 before medium pacer Jamie Galpin dismissed the next six batsmen at a personal cost of 41 runs.

The home team again recovered from 110-8 to 188 all out thanks for a daring half century by Hari Mamillapally who struck five sixes and shared partnerships of 28 for the ninth wicket with Alex Podolski and even more remarkably 50 for the last with Tony Breakspear who contributed two not out.

Sandhurst began their reply in positive fashion but Breakspear returned to haunt them in his more familiar guise of opening bowler as he trapped six of the visitors for just 17 runs.

Sandhurst batted in vain as Checkendon secured a comfortable win with the home side taking eight catches, the best being a steepler by Arrowsmith.

Elsewhere in the division rain brought the game at WOODCOTE to a premature end, doing the home side a favour, as they were heading for defeat against WOODLEY.

Woodcote captain James Worsfold made a good decision to bat first with the potential for rain, but the game might have resulted in a heavy defeat as the home team lost four wickets in reaching 50.

The innings was revived by a good partnership of 83 between a half-fit Jez Mayo and Jonny Aldridge but with the last wicket falling on the last ball, 161 looked insufficient to achieve the win.

As conditions worsened, Woodley got off to a good start and with skipper Fasul leading the way, they lost only one wicket in reaching 131 before the rain ended proceedings to present Woodcote with the winning draw.

In Division 1 PEPPARD STOKE ROW 2nds picked up a winning draw cour tesy of another early abandonment at STRATFIELD TURGIS/HARTLEY WES-PALL. Dan Bacon led the way with a studious 42 and with many batsmen making starts but failing to progress the total of 200-8 off 45 overs which was achieved when Nathan May scored his first run for the side on the stroke of tea. Danny May lit up the closing stages of the innings with a clean-struck six over the pavilion.

The game was in the balance when the rain came with Stratfield Turgis 124-4 off 24 overs with Josh Perkins taking two wickets in an accurate spell of leg-break bowling.

U15 all-rounder Simmons (43) and fellow youngster Daniel Watts (22) put on 44 for the opening wicket as Peppard Stoke Row were able to reach their target in 21 overs.