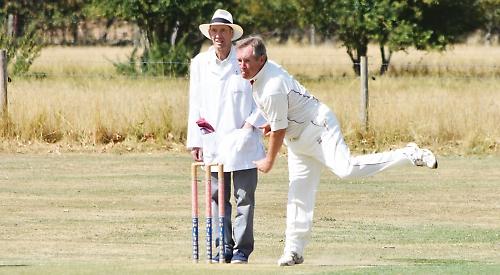 The hosts, having won the toss and electing to bat, added 71 before Imran Arshad had Ul-Haq caught at slip in the 15th over. Ian Dawkins had M Amjad caught at point with the home side on 98 as runs flowed to short boundaries as a number of catches was dropped.

Hurley clawed their way back to reduce Monks to 152-7 as skipper H Amjad, who had been dropped three times, fell to Jonathan Langlands and the safe hands of Ridgeway at extra cover.

Greg Double took a steepling catch that was drifting over his head to end Mahmood’s brief stay off the bowling of Ridgeway. This was after Double and Mike Walton had crashed into each other attempting a catch, Walton faring the worst with a gashed nose and Double mildly concussed. Monks had a final flurry through Butt to launch the home side to 209-9 from 45 overs.

In reply Hurley sent out Arshad and Mike Cole, the former carelessly hitting Kabir to point in the opening over.

A cautious 13 was added before Ian Dawkins was trapped lbw and Josh Cole steered his fifth ball to point. With three gun-batsmen gone for 22, Hurley were in a salvage operation.

Cole and Double added 33 runs before Double steered to gully. Mike Cole was bowled before the rain came at 6pm with Hurley 70-5. The match was eventually abandoned 25 minutes later.

HARPSDEN 2nds’ Division 1 promotion hopes were dealt a blow as they lost out at BRAYWOOD 2nds.

On a pitch that was always going to be difficult to bat on, Harpsden were put in to bat as proceedings strated poorly for the visitors as Hurst was quick to go, bowled by Rimhsan for 0.

This brought in-form I Brown to the crease who continued where he left off last week hitting the ball to all parts and taking the attack to the Braywood bowlers before being well caught for 24.

Another quick wicket had Harpsden at 48-3. Skipper Toby Stevens and Adam Birkett put on a vital partnership of 40 which was tough going given the invariable nature of the Braywood pitch.

Birkett remained watchful for his 41 picking up singles with the rare boundary as scoring remained difficult. Moore and Birkett put on another 35 leaving Harpsden 123-4 with 12 overs to go. However, a major collapse for the visitors left them 134-9 off their allotted overs.

With Harpsden protecting a small total but on a pitch which favoured the bowlers, early wickets would be key and early wickets is what came.

Rod Birkett (8-2-25-4) got two wickets in his first over of the innings, well backed up by leg-spinner Gulfraz at the other end. Braywood were reeling at 17-4.

R McDermott (23) and B Vijayan put on 50 before Zain Raja removed McDermott, well caught by Adam Birkett. The introduction of Tom Dawson, who picked up two quick wickets, left Braywood on 113-8.

However, opener Vijayan, who rode his luck at times, punished the bad ball with his attacking intent and eventually took Braywood over the line, eight wickets down, finishing on 99 not out.