Teenager shines with bat and ball for Wargrave 2nds 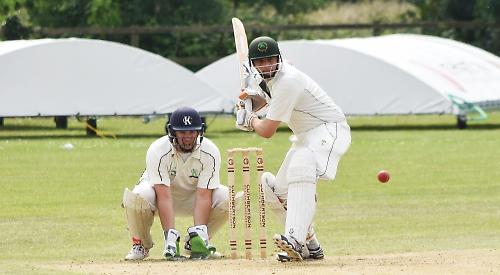 HENLEY 2nds slipped to the foot of Division 1 last Saturday as they crashed to an eight-wicket defeat at home against STOKE GREEN.

Having won the toss and electing to bat first at the Brakspear Ground Henley were bowled out for 205 with Charlie Homewood, batting at number four, top scoring with 53 not out in an innings that included five boundaries.

In reply Stoke Green knocked off the required runs to win the match for the loss of just two wickets.

KIDMORE END ran out 26-run winners at KEW in Division 2A on a pitch that puddled on the outfield following overnight rain.

The accurate bowling of Kew, who had won the toss and elected to bowl, paid off early on. Kidron Thomas picked up three of the first four wickets, due to lateral movement and some degree of accuracy.

The nagging seam bowling of Richard Boardman took the other wicket. The openers had reduced Kidmore End to 23-4 after 15 overs. The situation did not improve much for Kidmore when first change bowler Edward Taylor made it 42-5 from 20 overs with opening batsman Jeff Sheldon not out on 20.

Skipper James Frost joined Sheldon and initially the pair just sought to survive on the slow, damp pitch with them both finding it hard to time the ball.

By the 35th over Sheldon started to play a few more aggressive shots, hitting the spinners over the top. He eventually fell in the 40th over caught off the bowling of Thomas. Sheldon scored a momentum blunting 58 from 146 balls, striking nine fours.

Simmons came in and looked lively for a quick eight runs before he was caught in the 41st over with the score on 132-7.

Alex Crawford and James Frost managed to seize back the initiative of the game in the last nine overs of the innings. The pair only struck five boundaries in their 26-minute undefeated partnership of 55, but the duo ran aggressively turning singles into twos. Crawford finished the innings with 19 not out from 18 balls, striking only one four. Frost finished the innings 60 not out from 96 balls hitting just six fours as Kidmore End ended their 50 overs on 187-7.

Kidmore made the most of their limited bowling resources thanks to some good supporting fielding as every player on the field worked hard to back their bowlers up.

Bodeker caught a hard-struck pull in the second over of the innings off Sheldon. Frost snuck an lbw the next over before Leonard took a legside catch standing up to the stumps off of Sheldon to leave Kew on 14-3.

The hosts recovered as the fourth wicket added 41 and it took some miserly overs from Faroqi (6-1-16-0) and Crawford to slow the batting team down. It was Crawford who took the key wicket thanks to a catch by Faroqi who had to turn and run back and take a catch that passed over his head. Shortly after this he took a second catch off of the accurate Crawford.

Crawford took a third wicket trapping the batsmen in the crease and in front of all three stumps lbw. This reduced Kew from 53-3 to 90-6. The pressure was mounting but Kew skipper Lewis Abbott attacked the bowling from the off, striking a number of boundaries both along the floor and sixes.

Crawford removed Hasan to finish with figures of 10-4-15-4 from his allotted overs. The rain started to come down and this then brought the Duckworth Lewis method into the game.

Richard Frost took a good catch at backward point for dismissing Abbott for 45 from 60 balls. Abid Ul Wahab’s bowling was able to burst through the last two batsmen sliding off the wet pitch, now sodden thanks to the increasingly heavy rain. Kew were all out in 43 overs for 161.

WARGRAVE snatched victory in Division 2B via the Duckworth Lewis method to keep them in the hunt for promotion at ROYAL ASCOT.

The hosts posted 229-8 from their allotted 50 overs with Gareth Baker top scoring with 64.

Sam Bowers (56) got the Wargrave innings off to a rapid start but the loss of Bowers and two other quick wickets put them behind the rate. Imran Malik and Neal Robinson rebuilt to sneak Wargrave back on top but the loss of Malik (34) swung the calculation in Ascot’s favour.

With rain starting to fall, Robinson (60 not out) was joined by youngster Ollie Newton (9 not out) and between them they did just enough to overtake the Ascot score via Duckworth Lewis before the rain put a stop to proceedings.

HENLEY 3rds picked up a vital 171-run win in Division 4A against THEALE AND TILEHURST 2nds as they continue their quest to avoid relegation.

Henley were asked to bat first at Nettlebed. The opening bowlers found movement through the air and off the seam in favourable conditions, reducing Henley to 49-4. Skipper John Neville and Tom Jordan dug in and with the help of some wayward bowling brought the home side back into the game.

The partnership of 139 runs was ended when Jordan was caught and bowled for 48, introducing Adam Lubbock to the crease. Lubbock sent the ball all round the ground in his quick fire 40 from 20 balls, and when Neville was run out in the last over for 74, this left Henley on 251-6 from 45 overs.

Theale and Tilehurst never got going in their innings, as Henley found similar levels of movement with the new ball. Openers Andy Chappell and Eliot Hyman bowled with accuracy and skill in controlling this movement. With the score on 69-6, Henley knew the rain was coming and were sprinting round between overs to get the game in. The introduction of Freddie Loveland into the attack dealt with any resistance as he cleaned up the tail with a superb spell of bowling, taking 4-19 from 6 overs. Chappell was the pick of the bowlers, securing 5-35, his first fifer for Henley 3rds.

After being put into bat, Wargrave’s openers Charlie Moss (63) and Dan Ormond (27) got the team off to a flyer, scoring 97 before losing Moss in the 14th over. Konidena (64) continued the free flowing scoring in the middle of the innings, partnered ably by Kieren Lall (26) and Matthew Townson (32), before Harry Reddy entered the fray in the last few overs, smashing 48 not out in 17 balls to ensure that Wargrave posted a daunting total of 307 runs in their 45 overs.

Aldershot lost their first two wickets cheaply to Arul Appavoo, but Ben Harris (72) counter attacked bravely and with rain threatening there was a moment in the game where Aldershot could have snatched victory on superior run rate.

However, as soon as Harris was dismissed the writing was on the wall and Aldershot were bowled out for 155, with Konidena 5-26 and Reddy 3-23 wrapping up the tail.

In Division 7A hosts KIDMORE END 2nds ran out comfortable nine-wicket winners against EVERSLEY 3rds to keep their outside promotion chances alive.

Having won the toss Kidmore elected to bowl first. The Eversley openers Gerard Soames and Bill Burnett put on 85 for the first wicket until Andrew Thomsen got the breakthrough clean bowling Burnett.

Eversley’s innings was built around 70 from opener Soames and Eversley’s captain Matt Salter who made a robust 83. They made use of a rapid outfield which had not been affected adversely by the previous day’s rain, Kidmore chipped away at the Eversley innings and in the end were satisified with an Eversley score of 245 from their 45 overs. Hamish McNaught pikced up a wicket while Azhar Udeen took 3-36 from his 10 overs.

Kidmore’s innings started cautiously with Chris Pigden and Mark New having to bat through some prolonged drizzle. Both played shots around the wicket and the partnership was only broken with the score on 103 when Pigden was out for 52.

Luke Sinclair joined New and they carried on with pushing Kidmore towards victory. New finished on 108 not out which contained 21 boundaries while Sinclair finished on 41 not out Kidmore triumphed in the 39th over.

Fourteen-year-old Sam Warren’s 129 — his maiden league century — was the standout performance in WARGRAVE 3rds’ 128-run victory against DATCHET 4ths in Division 8A.

Opening the batting with twin brother Joe Warren (30), the duo constructed a speedy 74-run opening stand before Sam was joined by 13-year-old James Newton (59) who maintained the momentum and together provided the bulk of Wargrave’s impressive 259-5 in the allotted 40 overs.

With the big total to chase, Datchet were always going to struggle against the experienced Wargrave bowling line-up and were dismissed for 131 in 30 overs with Scott Walker (4-19), Kevin Rapley (3-33) and Scott Morton (2-34) sharing the wickets between them.

KIDMORE END 3rds crashed to a five-wicket Division 9A defeat at NEWBURY 3rds.

Batting first Kidmore End were bowled out for 148. In reply the hosts reached their target in 34 overs for the loss of five wickets.