Rowe and Davies pile on runs as title push hots up 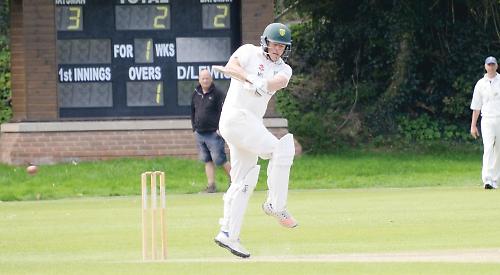 A COMPREHENISVE victory by HENLEY via the Duckworth Lewis method at HORSPATH in the first of the final four limited overs fixtures lifted Henley to second in the table with just three matches to play last Saturday.

Henley were without the services of captain Michael Roberts whose fractured arm will keep him out for the remainder of the season.

With the rejuvenated David Barnes also absent, into the side came Tom Oldershaw and youngster Johnny Connell who acquitted himself well with a maturity beyond his years.

With stand-in captain Tom Nugent losing the toss, Henley were invited to bat.

Winning the toss was the last success for Horspath for a long time as openers Matt Rowe and Jack Davies amassed 188 for the first wicket until the England U19 wicket-keeper Davies fell for 76.

Euan Woods, seeking to pick up the pace, was well caught soon after before Rowe eventually departed for a high-class innings of 123 off just 143 balls. The Cornwall captain is in a rich vein of form at present following his man-of-the-match performance for his county the previous weekend.

Following a belligerent 35 off just 24 balls by Richard Morris, the Henley innings fell away in the search for quick runs, but a final 50-over total of 282-8 was always going to be a challenge for Horspath who are not yet safe from the Home Counties Premier League Division 1 relegation zone. With rain threatening, the Horspath reply got off to a cracking start with openers Tom Coleman and Rob Eason proving severe on the opening attack of Nugent and Afridi.

Throughout the tumbling of wickets, Horspath’s overseas player Daryll Brown remained steadfast at the crease playing a mixture of conventional and unusual shots to finish not out on 76 when the promised rain brought a premature end to proceedings with four overs of the allotted 50 left. Horspath’s total had reached 203-8, well behind the required run rate giving Henley a deserved victory.

Henley’s final three games are at home to High Wycombe and Tring Park with a top-of-the-table class away to Slough sandwiched in between the two home fixtures.

It seems highly likely that the result of this fixture could determine the final outcome of the league.