Cole and Walton hold on to secure draw 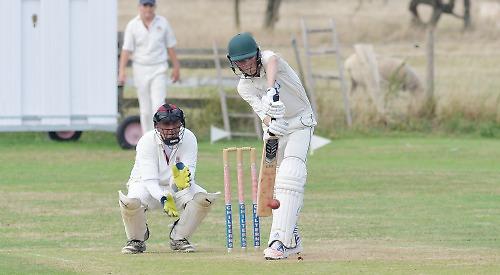 HURLEY’S tailenders held on to ensure they drew their home friendly with PEPPARD STOKE ROW MAHARAJAS on Sunday.

On winning the toss Mo Basharat opted to bowl first. Maharajas opener Pete Lamsdale made his intentions clear from the off, smashing the first ball of the match over extra cover to the boundary, the first of four from Basharat’s opening over.

At the other end his son Jacob played a more considered innings, making 24 out of an opening partnership of 76 inside 10 overs.

The introduction of Raheem Dad had Jacob top edging to the keeper. Three wickets in as many overs from Dad pegged the visitors back to 90-3. A tight spell of five overs for 11 from Adnan also helped to stem the flow of runs.

Pete Lamsdale reached his 50 from 36 balls before edging Dad on to his stumps. A wicket for Fiyyaz Mahmood reduced the visitors to 125-5.

Liam Cole was unfortunate not to pick up the wicket of Owen Ravden when the square-leg umpire turned down an appeal for a stumping. Ravden made the most of his reprieve to top score with 65 as the visitors declared on 254-7.

The Hurley reply got off to a good start with 17 runs coming from the first three overs before the batsmen started to give catching practice to the fielders.

Kayani was the first to go, chipping a return catch to Manik Nath. Hinnell and Gul soon followed, both lobbing Mat Kimber to Connor Lamsdale at point. A sharp, low return catch by Nath saw the end of Dave Walton at 41-4.

The middle order were blown away as Chris Proudfoot and Connor Lamsdale both picked up a brace to leave Hurley staring defeat in the face at 68-8 with 12 overs remaining.

Liam Cole played a good innings, facing 58 deliveries as he and Mike Walton saw out the remaining 74 deliveries to deny the visitors a victory.