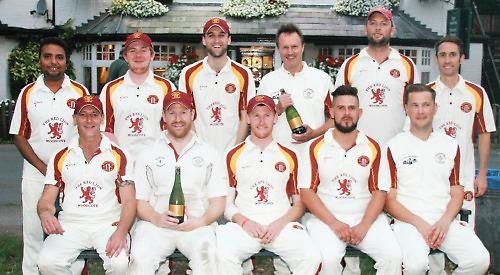 WOODCOTE’S first season in the South Oxon Friendly Midweek League ended in triumph as they secured the title with a play-off win against a spirited CHOLSEY team last week.

With four teams finishing level on points a play-off, a semi-final and final ended the campaign.

Cholsey elected to field and took an early wicket, but after that it became the Paul Knox show as he hit match-winning 115, after surviving an early stumping appeal. Shots were played to all parts of the ground and his ton included 11 fours and five sixes. Knox received good support from Ryan Lennard (18) and captain, Mark Pearson (24 not out).

With the final total being 176, Cholsey had a mountain to climb, but Homeward (33) and Heath (52) gave them a good start. However, Cholsey were always well adrift of the run-rate thanks to some good Woodcote bowling and fine fielding. Pearson was at his fiery best and his 3-24 included two wickets in two balls and his vice-captain, James Worsfold, gave good support with 2-9 in his four over spell. In the field, Jonny Clark led the way with a fine catch and some good ground fielding.

The destination of the title became obvious well before the end and Peter Howe, a Cholsey player and league secretary, presented the trophies to the victorious Woodcote whose winning margin was 47 runs.

• The South Oxfordshire Friendly Midweek Cricket League is looking to increase its number of teams for the 2019 season. This is an adult league, though suitable for young players of reasonable standard above the age of 14, and games with a Twenty20 format are played on Wednesday evenings, from mid-May to the end of July. Expressions of interest should be sent to the league secretary/chairman, Peter Howe at peterphowe@ntlworld.com or call 07775 697342.