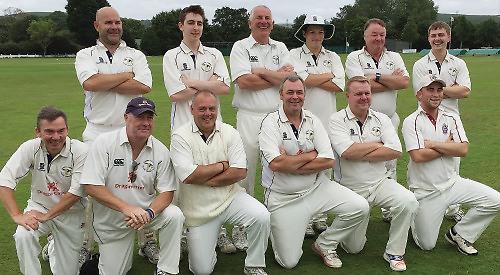 THE celebrations for SONNING COMMON’S 30th year continued last weekend when 37 players, committee and supporters triumphed by five wickets in Wales against PONTARDDULAIS.

The fixture was organised by Sonning Common’s Mike Cann who was Glamorgan’s pro player at the west Wales club who currently play in the Welsh Premier League.

Tidswell was well supported by Dave Foster (1-34) and Louis Gallimore (2-12) and also by some good fielding led by Mike Barker. All catching opportunities were taken as well as a couple of run outs towards the end of the innings as the Welsh club were bowled out for 144. Sonning Common’s reply was one of their best batting performances of the season. Against good quality pacy, bowling the villagers enjoyed the challenge on a good wicket that allowed them to use the pace of the ball.

The loss of Howard Cook early to injury bought Cann in to join Louis Gallimore and they both pushed the scoring along at a steady pace. Cann made 22 and Louis Gallimore 24 before skipper Chris Pitson took the game by the scruff of the neck.

The captain took the attack to the bowlers with some clean hitting and some fine shots to all parts of the ground in his 68. He was supported well by Luke
Pitson before the appearance of veteran Chris Gallimore who hit the winning
run.