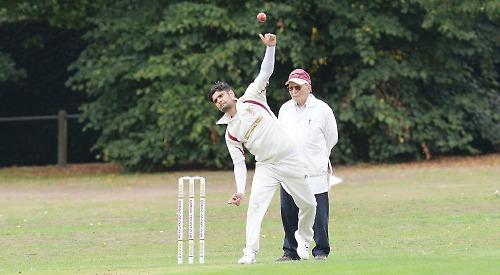 PREMIER Division champions CHECKENDON opted to bat on a dry pitch against WOODLEY at Woodford Park on Saturday and struggled initially, losing 2-21.

However, Matt Heslop and Ujqal Tikoo adapted admirably to the conditions, adding 116 before Heslop was run out for 60.

Tikoo went on to make 83 and there was a rapid 30 from Vikas Chib, enabling the visitors to reach 219-9.

The Woodley batsmen played their shots from the outset, taking advantage of the parched and uneven outfield.

Mahana Kirshan hit two sixes and five fours in his 37 but once he was dismissed by Chib, left-arm spinner Nimad Rahatekar ran through the lower order, finding turn and bounce after a change of ends to take 5-49 as the home team were bowled out for 159.

WOODCOTE’S defeat by six wickets against IBIS MAPLEDURHAM was a closer affair than the result might suggest.

The home side, playing at Mortimer West End due to the unavailability of their normal ground, scored the winning runs with the final ball of the penultimate over.

Woodcote captain James Worsfold elected to bat first and the early Woodcote batsmen struggled against the accuracy of Cudjoe and Hart. They did not pass the century mark until the 31st over, having lost three wickets at that stage.

Mark Pearson’s half-century was a good mixture of patience interspersed with good boundary shots. The run rate was accelerated when Jonny Clark played a short but explosive innings. The final total of 195 at the end of 45 overs looked to be enough for a win on a crumbling wicket.

At the start of the Ibis innings, James Worsfold and Mark Pearson bowled an accurate line with the old ball, but openers Singh and Hart clung on and put on 83 for the first wicket.

The other bowlers were less accurate, apart from Paul Knox (4-37 in 12 overs). However, Ibis had batting strength in sufficient depth, with Drury and Singh — returning late-on after retiring hurt — to see them over the winning line.

Elsewhere in the division GORING crashed to a 73-run defeat at home to BERKSHIRE COUNTY SPORTS.

Batting first the visitors were bowled out for 235 with Peter Slade and Chris and Toby Winterbottom all taking two wickets each.

In reply Goring found runs hard to come by as they were bowled out for 162 with opener Chris Winterbottom top scoring with 37.

PEPPARD STOKE ROW 2nds made it four wins in five matches as they ran out comfortable winners in their Division 1 home clash against CROWTHORNE AND CROWN WOOD 2nds.

Stand-in skipper Olly Nicholson elected to bat on a slightly damp track but the gamble paid off as Dan Bacon and Dom Hall seized on any rare loose deliveries to score 44 off the first seven overs.

Brothers Danny and Nathan May helped push the score along with good running between the wickets and Peppard Stoke Row were well-set at 91 off 20 overs at the fall of the fourth wicket.

Olly Nicholson, batting at number six, hit his first ball for a maximum. He and Ian Hepburn then put together a partnership of 88 in 12 overs, with Nicholson bringing up his 50 off 26 balls with another six.

After Ian Hepburn was eventually bowled by an off-cutter Chris Proudfoot then provided additional impetus with several good front and back foot drives. He and Nicholson put together a 50-run partnership in the next 10 overs as the Crows opted to post seven fielders on the boundary.

Nicholson was out in the 41st over for 92 off 61 balls having hit eight fours and five sixes. Proudfoot (40 not out) and Gerry Bacon then added a further 30 runs to enable Peppard Stoke Row to post an impressive 257-6 off 45 overs.

Peppard Stoke Row needed an early breakthrough after tea and it came in the second over courtesy of a one-handed catch at gully by Allan May.

Birthday boy Ian Jackson bowled his best spell of the season, taking 6-48 off 12 overs, including a diving caught and bowled. Jackson was ably supported by Roy Hayden’s two wickets in a tight eight-over spell and Nathan May’s maiden second team wicket in his five-over spell of quick bowling.

Crowthorne’s Charlie Blake was the only batsman to reach double figures in a run-a-ball 27 as Peppard Stoke Row held all their catches in a solid fielding display.

It was left to Proudfoot to take the final wicket with his first ball, enabling the hosts to wrap up a resounding win by 176 runs in the 26th over. The result moved Peppard Stoke Row up to fourth in the table.

Nick Windsor’s 52 was not enough for PEPPARD STOKE ROW 3rds as they slipped to a 36-run Division 2 defeat against SULHAMSTEAD 3rds.

U15 Owen Simmons was again in fine form as he claimed 4-35, but Madhur Sharma’s hard-hitting 130 allied to Babu Longanathan’s 69 allowed the visitors to post 240-6 in their 40 overs.

Remarkably, all of the Peppard Stoke Row top five scored between 14 and 18 before Windsor came to the crease, but a lack of a substantial score to match Sharma’s meant the home side could only reach 204-9 in reply.