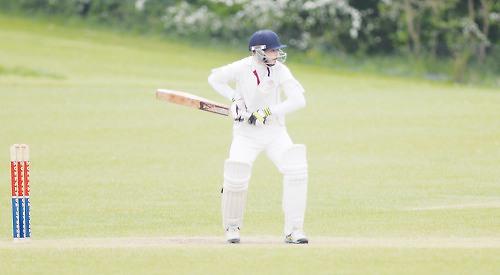 A CLOSE Premier Division derby clash between HURLEY and LITTLEWICK GREEN at Shepherds Lane last Saturday ended with the visitors winning by a narrow margin.

Hurley were reduced to 10 men after a late dropout on the morning of the match and on winning the toss, Phil Ridgeway inserted the visitors in overcast conditions.

Littlewick Green got off to a flying start with 27 runs accruing from the first three overs, but they were soon pegged back as Jonathan Langlands found his rhythm.

It was Langlands who made the breakthrough when Richard Thomas chased a wide delivery, toe-ending it into the keeper’s gloves. Two wickets in consecutive overs reduced the visitors to 38-3 as Arshad trapped Warren Fry lbw and Shaun Graham chipped a leg stump full toss from Langlands straight to Arshad at backward-square.

A partnership of 45 between Littlewick skipper Adrian Hurley and Junaid Akhtar got the visitors back on track before a diving catch at slip by Ridgeway off Ian Dawkins removed Hurley.

The Hurley bowlers combined some good bowling with a plethora of ill-directed wides, which ultimately proved costly. Henry Graham replaced Langlands at the river end and struck with his second delivery, a middle stump Yorker, to dismiss Blundell.

One over from Dawkins put Hurley firmly in the driving seat, dismissing Akhtar, caught one-handed by Arshad at mid-wicket, Nawaz, caught and bowled, and Brockwell, bowled middle stump, to reduce the visitors to 128-8.

Graham struck again to dismiss Gill leaving Chris Symonds to add 14 runs to take the visitors to 161 all out from 34 overs before Graham claimed his third wicket.

Hurley opted to open with Mike Walton and Imran Arshad, but the partnership only lasted seven deliveries. Walton played out a maiden to a hostile opening over from Evan Gill and then Arshad played all round an in-swinging delivery from Brockwell.

Despite some stubborn resistance from Walton and Ridgeway, Hurley soon found themselves in familiar territory at 41-5 after 20 overs.

Ajmal Ali and Jono Patrick staged a recovery with a partnership of 89 for the sixth wicket. When Ali fell to Fry in the 39th over, 32 runs were needed from the last six overs which looked well within the grasp of the home batsmen. Some tight bowling from Fry left the hosts still needing 13 from the final over. Only three runs came from the first two deliveries before a hat-trick from Fry removed Langlands and both the Graham brothers to seal the victory.

A much improved performance from Hurley, however the 43 wides sent down by the bowlers ultimately proved crucial in a low scoring match. The 13 points gained ensured Hurley’s survival in the division with two matches remaining.

HARPSDEN 2nds crashed to a nine-wicket Division 1 defeat at home to table-topping DENHAM.

Having won the toss Harpsden elected to bat first on a good pitch. The Denham opening bowlers Pranav Desai and Faisal Mahmood extracted some lively movement in the cloudy conditions and soon made inroads into the Harpsden top order.

Desai had Smith trapped lbw followed quickly by Ian Brown chipping a fuller delivery to mid-on. The wickets kept tumbling as the Denham bowlers repeatedly hit a good line and length, finding just enough movement to cause problems for the Harpsden batsmen.

Only Tom Mitchell was able to weather the storm with some careful and skilful play but wickets continued to fall around him with Mahmood picking up 5-30 and Desai 3-11. Mitchell was the last Harpsden wicket to fall, bowled by Sharma with the score on just 61.

The low total never looked competitive but the Denham openers Lupton and Butt weathered some lively overs from Stevens and Brown whilst keeping the scoreboard ticking over. Bhaskar and Birkett bowled accurately with Birkett picking up the wicket of Butt but Denham reached the target in the 13th over for a comprehensive victory.

Hosts LITTLE MARLOW 2nds held on for a draw in their Division 2 home clash with HURLEY 2nds.

Hurley skipper Steve Taylor opted to bat first after winning the toss. Mike and Josh Cole opened the batting and were circumspect to begin with against the opening bowling attack of Lathey and Srivastrava. Once set, they began to expand and runs were easier to come by with Josh taking the more dominant role in a partnership of 95 for the first wicket. After reaching his half-century he holed out to gulley off skipper Ged Holmes for 54.

Abdullah joined Mike Cole but was adjudged lbw after a brief stay which left the visitors on 105-2. Cole was joined by Scott Taylor and together they plundered the Little Marlow attack for 94 runs in just 14 overs. The tiring Cole was finally bowled by Ishaq to leave the visitors on 197-3 with 10 overs remaining.

Steve Taylor joined his son Scott and together they ran the Little Marlow side ragged with regular boundaries and running between the wickets. An all-run five was a highlight as all the fielders were on the boundary and buzzers were gratefully taken.

As the 47th and final over began, Scott was on strike and 91 not out – three twos off the first four balls left him on 97 before he plundered the last two deliveries for four to take him to a maiden league century and 105 not out. The innings included 13 fours, a five and a six. Hurley finished on 285-3 from their 47 overs.

Little Marlow’s openers dug in against the twin attack of Alex Williams and Scott Taylor and although never scoring at the required rate, were difficult to remove. An opening partnership was brought to an abrupt end by Josh Cole who tempted Findlay to slice the ball to cover where Steve Taylor took the catch.

Four balls later Alyaas skied the ball to the grateful Taylor and in Cole’s next over Lathey was victim to the same combination. The introduction of Ali removed opener Lancum for 71, Scott Taylor taking a catch running round from mid-off.

Despite a quickfire 30 from Ishaq, Hurley were now sensing a victory and Nigel Haines bowled well to take three wickets leaving Little Marlow on 154-7 with 10 overs remaining.

This brought together the experienced pairing of Ged Holmes and Richard Tinsley and despite bowling changes and a late wicket for Scott Taylor, the hosts batted out for a draw finishing on 211-8.