Nugent in seventh heaven as he swings game Berks way 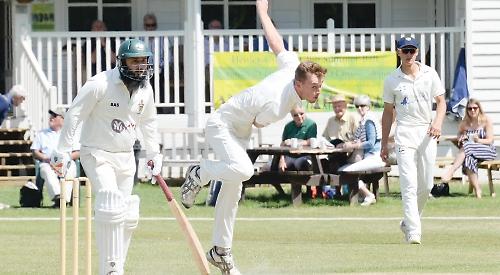 BERKSHIRE held their nerve to defeat CHESHIRE by three wickets on Tuesday and move closer to retaining their Western Division title.

They have now won all five of their championship games but had to dig deep to maintain that run at Chester Boughton Hall.

The defending champions restricted their hosts to 254-9 in their first innings, having had them in even bigger trouble at 194-8.

Berkshire then produced their worst batting performance of the season, managing only 148. They were 63-6 before Stewart Davison (34), Tom Nugent (22) and Chris Peploe (16) managed to make the total slightly more respectable.

Not used to trailing on first-innings scores, Berkshire were incredibly fired up when they returned to the field — none more so than Nugent.

The Henley paceman ripped into the Cheshire batting with such ferocity that wickets soon started to tumble and they were skittled out for just 99, the last five wickets falling for a mere five runs, with Nugent claiming career-best figures of 18.2-6-38-7.

Once again, the fielding and catching was of the class of champions with keeper Stewart Davison accepting four catches, three of them off Nugent.

Other highlights included Ali Raja running in from long leg before diving forward to take a catch just inches above the ground, while Peploe snapped up a smart low catch at second slip and Richard Morris leapt skywards at square leg to take a brilliant high catch to end the Cheshire innings.

On the final morning, James Morris and nightwatchman Alex Russell lifted the total to 125 before the latter was bowled for 19. James Morris continued to bat nicely along with brother Richard until being trapped lbw for 63, having faced 114 balls.

It was the second highest score in the match, only being bettered by Rick Moore’s 68 for the hosts on Sunday. Dan Lincoln hit a quickfire 15 and debutant Joe Cracknell four, leaving Berkshire 175-6.

Richard Morris and Davison moved the total on to 204, when the former was stumped for 38, leaving Peploe to strike the winning boundary, back over the bowler's head, to take Berkshire to 208-7 in the 54th over.

They will now be looking to complete their Western Division fixtures with a 100-per-cent record when they take on Dorset at North Perrott CC on September 2 to 4. They need a maximum of 10 points to retain the title.

Before that, Berkshire and Cheshire could meet again this Sunday at the Wormsley ground near Stokenchurch as both are through to the semi-finals of the MCCA's new Twenty20 competition — taking on Devon and Norfolk respectively, with the games at 10am and 1pm. The final is scheduled for 4pm.