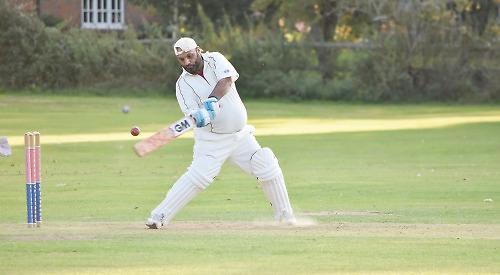 HURLEY ended a dreadful run of six defeats and a draw in their last seven games with a four-wicket win against EMMBROOK AND BEARWOOD in the Premier Division on Saturday.

A 15-minute delay to allow for traffic problems saw Emmbrook win the toss and opt to bat with Hurley putting all 11 on the field just in time.

Ollie Williams and S Jain were aggressive as they notched up 27 runs from the first five overs.

But Williams soon fell following some impressive pace and movement from Fayyaz Kayani, who pegged back his off stump.

Jain was also out when driving fiercely to extra cover where Joe Graham smothered the catch off his younger brother Henry’s bowling. But then Narraway provided stubborn resistance, adding 24 runs to the total.

Arshad then replaced Graham and he immediately got his out-swingers going. His sixth ball had Ragagotalan fencing and his edge dipped behind and into the gloves of Greg Double.

The visitors then dug in with a fourth wicket stand of 43 runs before Joe Graham had J Williams lolloping a return catch.

Graham had replaced Arshad, who was brought out of the attack by the umpire for two head high deliveries.

The visitors were then restricted to 122-7 before Cole, 22 runs, and Howarth, 13 runs, found the boundary rope, smashing 28 runs from the 44th over and Balakrishnan’s 27 not out lifted his side to a testing total of 192 runs.

In reply, Shoab Kayani and Imran Arshad marched out to do battle. Kayani pulled Cole to the mid-wicket boundary to show intent but then next ball tried the same to be adjudged leg before wicket for seven runs.

Arshad made 14 runs before he was beaten by pace and Yasir Gul made his usual brief cameo as Hurley slipped to 28-3.

But then Hurley added 80 runs for the fourth wicket in 13 overs between Abdul Jabbar, 89 runs, and and Fayyaz Kayani, 44 runs. Both played with abandon before Kayani edged Howarth to keeper Narraway. Phil Ridgeway then joined Jabbar to encourage a few more singles as these two added a further 54 runs.

Henry Graham, 11 not out, then steadied the ship after Jabbar fell to a sharp catch at short cover. Hurley coasted over the line inside 37 overs to finish the season third from bottom in the division.

In Division 1, PINKNEYS GREEN 2nds won the toss and inserted HARPSDEN 2nds on a wicket that looked like it might do a bit early on.

Opening bowlers Harris and Rashid quickly found their rhythm and made life difficult for the Harpsden openers Burgess and Eslick, who managed to dig in and punish the rare loose ball.

The breakthrough came when Harris had Burgess strangled down the leg side with Eslick quickly following, caught off the bowling of Rashid.

Pinkneys continued to take wickets after Smith was caught off Harris after a breezy 15 runs. Smith’s dismissal brought Cooper and Paice together who steadily and skilfully built a decisive 100-run partnership.

When Paice and Cooper were eventually out for well made half centuries, the Harpsden lower middle order, featuring Dawson and Brooks, pressed the accelerator to set a competitive total 226 runs.

Harpsden elected to start with the old ball with Birkett and Gulfraz opening the bowling but they had little reward as the batsmen dispatched any loose balls.

Birkett got the breakthrough when he bowled Razaq and then immediately Nasir with a flighted delivery. Harris and Heyes then began to rebuild the innings and punished some wayward bowling from Harpsden.

Having put on 50 runs, with the game now in the balance, Brooks broke the partnership, having Harris caught at point by Cooper which prompted a steady loss of wickets, with Khan hanging in there for his score of 33 runs.

Brooks and Birkett wrapped up the innings with Pinkneys being bowled out for 140, with Birkett finishing with figures of 5-27 giving Harpsden victory by 86 runs and a fourth-placed finish in the league.

HURLEY 2nds ended their Division 3 campaign with an eight-wicket win at PENN AND TYLERS GREEN 2nds.

Father and son Neil and Lochie Christopherson opened the innings against the Hurley seam attack of Alex Williams and Ajmal Ali.

Both bowlers found some assistance from the pitch but it was a run out that claimed the first wicket. Young Lochie called for a single as his dad hit the ball straight to Lahore Singh at point and the fielder’s throw to the keeper was accurate enough to leave the batsman short of his ground.

Kenzie Christopherson replaced his brother and was aggressive from the off but paid the price when he smashed Williams to mid-on where Ian Harvey held on to a sharp catch as he departed for 12 runs.

Having seen both his sons dismissed, Neil Christopherson shared in a partnership of 28 runs for the third wicket with Mark Wooley before Harvey trapped him leg before wicket to make it 60-3.

Harvey then devastated Penn’s innings with three wickets in two overs, without conceding a run to reduce the hosts to 65-5.

Joban Singh then had Alex Wooley caught off an inside edge by Mike Walton behind the stumps for 65-6.

Will Smith played some solid defensive shots but was undone playing across the line to Joban. Veteran Terry Bentley showed some stubborn resistance before being adjudged leg before wicket to Singh’s first delivery.

At 84-8 it looked unlikely that the hosts would reach three figures but Powell, 15 runs, and Marriot, nine runs, saw them pass 100 to claim a batting point.

Nigel Haines replaced Joban and finished off the innings with 2-3 as Powell and Marriot both lost patience, charging the slow left-armer, allowing Walton to claim two stumpings.

Bentley opened the attack for Penn but his off-spin did little to trouble the batsmen with Walton claiming six runs off the first over.

At the other end, Mike Henderson, also bowling off-spin, proved a bit more of a handful conceding only 16 runs from his seven-over spell.

Everything looked to be going well for the visitors as they eased to 35 runs without loss in the seventh over but a moment of madness from Williams saw him call for a bye as the keeper fumbled.

With the ball only a couple of metres away, Williams was sent back and Smith recovered to throw the ball to the bowler’s end to leave the Hurley skipper well short of his ground.

Akash Singh looked to be aggressive but he only lasted eight balls, dragging a delivery from Henderson on to his leg stump with just enough force to dislodge the bail.

Harvey joined Walton at 44-2 with another 62 runs needed for victory. An unbeaten 40 runs from Harvey saw his side home without further alarm, with Walton finishing unbeaten on 18 runs, with 38 overs to spare ensuring Hurley finish the season as league runners-up.