Morris smashes bowling out of ground in scintillating century 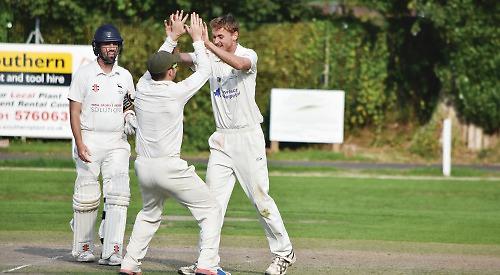 It was Henley’s sixth consecutive victory in a compelling and irresistible charge to the top following a modest start to the first third of the season and a period of consolidation and steady progress through the middle third.

But Richard Morris, having played himself in, set about the Tring bowlers in a most brutal manner. He and Andrew Rishton put on 62 for the fourth wicket but it was the fruitful partnership with the also in-form Euan Brock which banished any notions of a low score.

Morris, however, was far from done and smashed Payne, Harris and Choudhry all over the park and beyond into adjoining gardens, Remenham Lane and over the roof of the pavilion.

Little wonder the umpires had to resort to the boxes of spare balls whose contents were considerably diminished.

Morris was eventually caught at long-on with the score on 281, of which his contribution was 138 runs off 111 balls.

By the end of the day he would be the leading run maker in 2018 in Division 1 with 801 runs, which is all the more impressive as they came off just 14 innings. As last week, so this, Tahir Afridi, Dave Barnes and Mike Williams all made valuable contributions to finish the Henley innings on 308.

A run chase was always going to be a tall order for a Tring side which began purposely enough with Dixon showing plenty of intent, particularly against Tom Nugent.

Woodland went early, caught at slip, before the spin of Woods did for Dixon, brilliantly caught in the deep by Williams to make it 58-2.

After this, the wheels fell off the wagon in a matter of overs as first, Payne fell victim to a stunner of a one-handed catch by Brock, then Tring’s overseas Brent was caught behind with troubling the scorers, following which skipper Gumbs was caught and bowled by Woods also without scoring.

The incoming Choudhry lasted just seven balls before being caught behind off Woods (4-20 off 10 overs), also without scoring.

Tring were reeling on 66-7 and a winning total increasingly unlikely and, after that, it was really just a matter of time. Gough stood firm for a while and the lower order did their best.

But gradually they were prised out as O’Neill was left wondering what happened to his leg stump and Criddle was caught at slip, both off Afridi.

Fittingly, it fell to skipper on the day, Tom Nugent, to remove Harris’s middle stump and bring matters to an early close just after 5pm in just 34.4 overs which was the signal for much jubilation among the players and a large crowd.

Fittingly also, in his last game before retirement, David Barnes led the side from the field to great applause for someone who has been a fine player for Henley since 2009 and has been very much the heartbeat of the side.

The champagne was then sprayed around Formula One-style to bring down the curtain on a season which, had Henley started it in the manner they finished it, would have been decided long since.