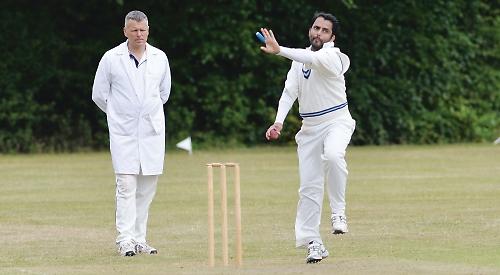 HOSTS GREYS GREEN ran out comfortable winners at home to HAMBLEDEN on Saturday.

Having won the toss and deciding to bat first the visitors ended their innings on 167-9 with M Shafqat taking 4-27.

In reply Greys Green openers Shafqat and B Ahmed were undefeated as they put on 72 and 88 respectively to win the match in just 30 overs.

A vast, fast outfield and a flat, pacy wicket seemed to be the formula for a mountain of runs at SWYNCOMBE on Sunday but that expectation turned out to be false and what transpired was a tense game which was only decided in the final over as GREYS GREEN triumphed.

Batting first Swyncombe struggled for runs throughout, against a tight Greys Green bowling unit, whilst J Crockett and Stevens were both dismissed when ready to counter-attack. It was only the arrival of Lewis, with help from D Crockett and Collins, which enabled Swyncombe to reach 156-7 at the end of their 35 overs allocation.

Greys Green lost an early wicket to Collins, who bowled fast and accurately throughout, but Shafqat and Holroyd kept the score ticking along at close to the required rate and together they took the score to 110, before Holroyd finally fell for 84, an innings which was particularly noticeable for its efficiency in dispatching bad balls to the boundary.

Swyncombe, through Lewis and the returning Collins, had put the brakes on the scoring and with the loss of three quick wickets, the outcome was in the balance.

Greys Green had just enough firepower in Lambert and Rooke and the cool head of Jenkins at the end. Rooke scored the winning boundary with just four balls remaining.