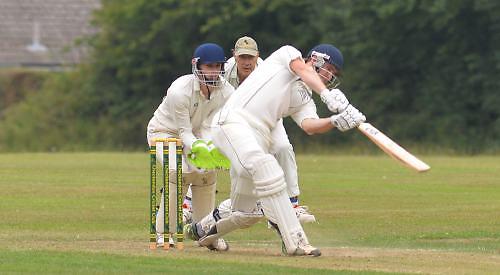 HARPSDEN continued their march towards the league title on Saturday with a winning draw at BRAYWOOD.

Harpsden skipper, Ben Hancock maintained his 100 per cent record of losing the toss and the visitors were invited to bat first on a dry surface that looked like it would pose some challenges in terms of variable bounce and spin as the game went on.

Opening batsmen Blake Hogan-Keogh and Adam Birkett took advantage of some uncharacteristically loose opening spells from Vijayan and Hafeez, resulting in Harpsden being 51-0 after seven overs. Harpsden’s free scoring was stemmed by the introduction of medium pacer Uddin and spinner Waheed, the latter having Hogan-Keogh caught behind just shy of his half century.

Sam Imlay and Duncan Verry came and went quickly, highlighting the difficulty of starting an innings on what was a tricky surface. Sasha Burgess rebuilt the innings alongside Birkett before falling to a caught and bowled from leg-spinner Khan, who also accounted for Ben Hancock with a delivery that didn’t bounce and Tom Hancock who chipped tamely to long-off. When Adam Birkett was run out for a well made 82, some aggressive lower order hitting from Stefan Franklin and Mick Molloy got Harpsden up to an above par 233-9 off of their 46 overs.

Braywood began their response circumspectly against old ball spells from James Paice and Blake Hogan-Keogh, with both creating multiple chances. The breakthrough came from Tom Hancock who had opener Hassan caught at point before Abdul Khaliq took a superb caught and bowled to dismiss Vijayan, who had begun to find some rhythm.

Hancock then knocked over home captain Raza before Khaliq removed Khan and then bowled Malik, the latter beginning to look dangerous.

The pressure built by Harpsden’s once again good ground fielding display resulting in two quick run outs leaving Braywood reeling at 160-7 at which point they decided to shut up shop to try and secure the draw.

Despite creating chances, Harpsden couldn’t take the final wickets for victory and had to settle for a winning draw.

PEPPARD STOKE ROW openers Peter Lamsdale and Mark Price made the most of good batting conditions at CHECKENDON to compile a partnership of 203 in 28 overs.

Lamsdale was first out for 112 from 94 balls after hitting one six and 16 fours but Price was caught one short of a century having faced only 84 deliveries.

Jim Warren’s offspin brought Checkendon back into the game as he took 5-52 in 12 overs but the visitors were still able to record 293-7 off 46 overs.

Peppard Stoke Row opened with spin both ends and were rewarded with early wickets, helped by a fine slip catch from Richard Ashton to dismiss John Acland-Hood.

Amal Tyagi hit back for the home side with 60 from 48 balls including two sixes and 10 fours but the run rate thereafter left Checkendon hanging on for the draw.

A late flurry from Rauma Adigantla took the total number of runs scored in the day to exactly 500 as the home team finished on 207-8.