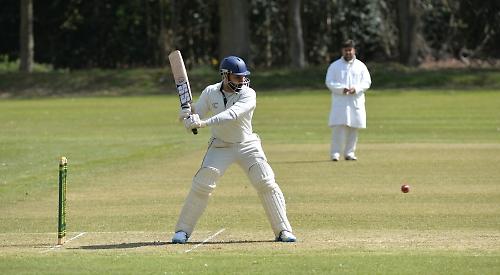 Skipper Ben Hancock won the toss for a third consecutive week and opted to bat first on a dry, dusty wicket.

Opening pair Blake Hogan-Keogh and Adam Birkett made a positive start with Hogan-Keogh in particular taking advantage of the short straight boundaries.

When Hogan-Keogh fell to a catch at leg-slip, Birkett was joined by Sam Imlay who continued to push to score along at a steady rate.

The pair put on 86 for the second wicket before Imlay opted to kick a straight delivery off middle stump, falling for a well-made 42. New batsman Govind Chand fell shortly afterwards, caught and bowled by leg-spinner Cockcroft, who bowled tidily, before Adam Birkett fell to a superb catch in the covers after passing his half century.

Micky Molloy and first team debutant Guy Fairburn rebuilt before Molloy became a victim of the rain delay, hitting his first ball back on the field straight to mid-off. This brought Hancock to the crease who upped the ante in the latter overs hitting 32 off 17 balls to leave Harpsden on 234 from their allotted overs.

Penn & Tylers Green lost opener Yates quickly, shortly followed by their number three to leave them reeling at 5-2. Second opener Wilson lost his middle stump shortly afterwards and despite some counter-attacking from Tattersall, in at number four, wickets continued to fall at regular intervals.

Change bowlers Fairburn and Paice provided no let up, picking up three and two wickets respectively to leave Penn & Tylers Green all out for 103 in 20 overs.

PEPPARD STOKE ROW suffered a first defeat in nine weeks as they went down by 94 runs at BALLINGER WAGGONERS.

Peppard were inserted into the field, but made a couple of early breakthroughs as Oli Sedgwick had Andy Thompson caught behind and Jason Vaughan-Davies induced a catch at second slip from Matt Sydall off the inside edge and pad of Freddie Thompson.

However, that was really as good as it got for Peppard as James McIntyre (76), Richard O’Kelly (78, retired hurt after top edging a ball into his face) and Tom Petrie (78) — who hit an extraordinary switch hit six off Dion Sampson and a reverse sweep off Vaughan-Davies for four — pushed the home side to an imposing 311-5.

Peppard lost an early wicket before Matt Syddall (30) and Sedgwick (25) rebuilt, only for the former to sky a catch to point.

CHECKENDON made the long trek to LEY HILL and looked like regretting it once Lewis Thompson hit a powerful 66, with two sixes and 11 fours.

His brother Jack scored 52 as the home team sped to a massive 288-9. The saving grace for the visitors was a spell of fast bowling from Amol Tyagi, who finished with 6-60.

Losing Manpreet Singh first ball of the innings was not the ideal reply but newcomer Sandeep Adlakha more than made up for it with a knock of 132, not out, in 80 balls.

Conditions were certainly in favour of good batting with a good pitch. Mayank Kedia was forced to retire hurt but was replaced by all-rounder Tyagi, who struck 111 not out in a mere 63 balls, which included five sixes and 17 fours.

Checkendon won the game at a canter with 12 overs to spare.