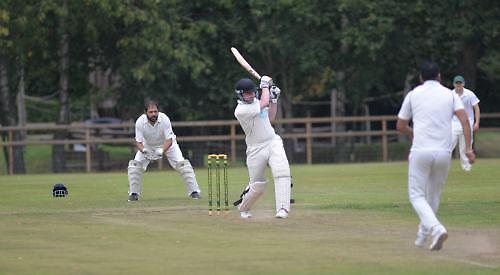 WOODCOTE won back-to-back matches in the Premier Division to secure the runners-up spot.

On Saturday, Woodcote bowled and fielded magnificently to bowl out CROWTHORNE AND CROWN WOOD for 135 in under 37 overs with Paul Knox taking 4-39 and James Worsfold 3-19.

In reply, the Woodcote batsmen had to work hard on an unpredictable pitch and against a determined Crown Wood attack.

However, when Anthony Cluett took three wickets in one over, the pendulum swung back briefly towards the home team.

It took a really assured innings from Ryan Van Heerden (24, not out) with solid support from Tim Fitzgerald to take Woodcote over the winning line.

On Sunday, GORING elected to bat and was given a great start by skipper Ollie Carrier (32), Chris Walsh (36) and 14-year-old Olly Winterbottom (27). However, their progress was slowed by tight Woodcote bowling from Mark Pearson (2-17), Rakesh Patel (2-32) and James Worsfold (1-27).

Jonny Clark distinguished himself by dismissing three batsmen in the last over, the only over he bowled.

Goring’s 186 looked a good total, but Woodcote’s innings got-off to an equally good start with Paul Knox hitting a rapid 50 in a 64-run stand with Scott Gore (20).

Ryan Van Heerden (39) then took up the mantle of the previous day and Jonny Clark (20) also added useful runs. It still took a really positive partnership between Jonny Aldridge (28, not out) and skipper, James Worsfold to secure the five-wicket win.

It was fitting that the winning runs came in the shape of a mighty six from James Worsfold whose inspirational captaincy received its just rewards. For Goring, Ollie Winterbottom (2-26) was the pick of the bowlers.

Andy Watts made a fabulous 93, but lacked support as PEPPARD STOKE ROW 2nds’ chances of a top-two finish in Division 1 were all but ended with a four-wicket home defeat to TWYFORD AND RUSCOMBE.

Watts held the Peppard innings together during an 112-ball knock, but with fellow opener Rob Simmons (18) the next highest scorer, Peppard were dismissed for 173.

The hosts rallied, however, with Ruaridh Scott (2-18) leading the way in reducing Ruscombe to 77-5.

Robin Thompson, though, played a sensible innings in accumulating an unbeaten 47 from 99 balls, and with Andrew Miller (43 from 30) and Gopi Kolloru (25, not out from 18) providing the fireworks at the other end, the visitors were able to reach 174-6 with 32 balls to spare.

Henry Fraser became the 50th player to represent PEPPARD STOKE ROW 3rds this season, and the Oratory School gap student proved his worth in ensuring his side avoided relegation with a 137-run victory at CHECKENDON 2nds.

Fraser struck 17 from just nine balls after opening the batting, but his departure allowed Sam Kimber (36) and Mikey Hennessy (68) to combine to lead the away side to a competitive 208-7 in the 36 overs of a rain-affected game.

Mark Lambert also blasted 28 and another gap student, Luke Mannix, (26, not out from 15 balls).

Checkendon never got going in reply, with opener Vikas Sharma (24) one of only two batsmen to make it to double figures in their total of 71.

Peppard skipper Matt Kimber (3-24) led the way, but it was Fraser (3-6) and Dominic Evans (3-10) who polished off the lower order and ensured the away side will still be playing Division 2 cricket next season.