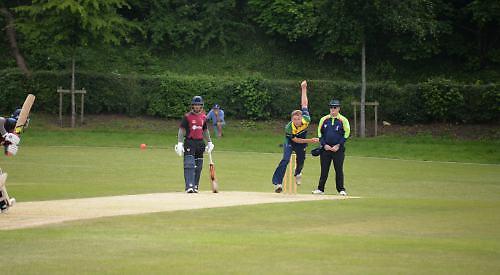 HENLEY maintained their unbeaten record with a regulation win over HORSPATH in the Home Counties Premier League.

Now while the hosts may be heading into Division 2 next season, they were determined to give a good account of themselves against the league champions and it made for an entertaining game.

Winning the toss, Horspath decided to bat first and set off at a decent rate of scoring. It was not until the 16th over that Euan Woods removed opener O’Connor.

By then, Henley skipper Mike Roberts had opted for an all spin attack of Woods and Ali Raja, which worked quite will until Woods was replaced by Euan Brock, to whom the burly Cosford took a real shine, smiting him agriculturally out of the ground for four sixes in a two-over spell that went for 33 and made it 105 off 22 overs.

Raja and Harry Jordan restored order, the latter accounting for Cosford, caught by Tom Nugent at extra cover. But Eason and Green pressed on, the former falling just shy of a 50 and then Green and Hawtin put on 49 for the fifth wicket before Nugent returned and cleaned up the middle order and the tail, the last five wickets going down for just 15 runs. Between innings, wind and rain passing through threatened to intervene but no time was lost.

Roberts went early, caught behind wafting airily at a wide delivery, but Rowe and the in-form Jack Davies, who hit 119 in Henley’s last game, combined once again to give Henley an excellent platform.

Rowe’s dismissal, back on his stumps to one that kept low came as a surprise, but Richard Morris also took up where he left off last week and put on 73 with Davies for the third wicket.

Morris became Belcher’s second victim of the day when he was bowled for 30.

Woods then ambled to the wicket and, despite losing Davies soon after, and later Andrew Rishton to a wild hoike, he calmly constructed another unbeaten innings into the 40s to see Henley home with 12.5 overs to spare for a result that followed the form book.

Henley now progress to the last game of the season at home to Datchet on Saturday. The visitors were at one time in close contention for the league title, but no longer, in a game which will determine whether Henley can maintain an unbeaten record in 2019.