Spinners do the damage as Berkshire win trophy 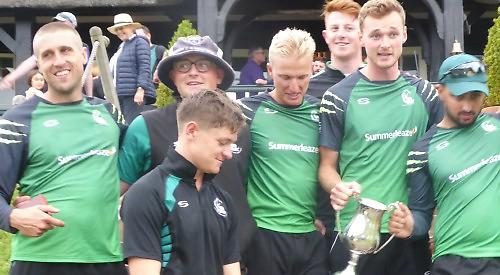 HENLEY paceman Tom Nugent kept his cool to secure a one-run victory for BERKSHIRE over CUMBERLAND in a thrilling MCCA Trophy final at Wormsley on Wednesday last week.

With Berkshire having been bowled out for 144, Cumberland needed six runs to win going into the last of their 50 overs with nine wickets down, although five would have been enough as they had lost one fewer wicket.

Nugent had the responsibility and conceded only two runs off his first five deliveries. So three runs were required off the final ball, but Adam Syddall, striking the ball back past the bowler, and Toby Bulcock managed to run only two — and Berkshire were victorious.

They also became the first side to successfully defend a total below 200 since the Trophy began in 1986.

Skipper James Morris said: “Tom’s final over may have looked nerveless but it wasn’t nerveless for him. He was very nervous. It’s not a job we have given him often so for him to be able to take that on with such a huge amount on the line was fantastic. I’m delighted for him.”

He added: “Both teams had attacks that meant that batsmen were going to have to work hard for their runs. We have played games here where more runs have been scored in one innings than in the whole game today.”

In fact, the Berkshire total could easily have been lower. Henley’s Jack Davies and Datchet’s Chris Peploe were the top scorers with 31 runs each, but the former was dropped when on six and Peploe was also put down on 20.

Berkshire’s total was around 50 short of their original target on a slowish wicket that favoured the spinners, which led to Luke Beaven bowling the first ball of the innings to Sam Dutton which he edged into the hands of Davies. The same bowler trapped the other opener, Toby Mowatt, leg before wicket to leave Cumberland 16-2. Henley spinners Euan Woods and Ali Raja, along with Datchet’s Chris Peploe, then got among the wickets to reduce their rivals to 65-7, and a stand of 30 came to an end when Woods bowled Liam Grey for 12, making it 95-8 in the 36th over.

Ben Howarth was joined by Bulcock, who had earlier taken 3-25 from 10 overs, and they started to edge their side closer to the target until the former fell leg before wicket to Beaven for 18, with the total on 121-9 in the 43rd over.

But Bulcock, with a couple of boundaries, raised hopes of a Cumberland victory. Going into the final over they needed five to level and win by losing fewer wickets. Syddall managed only two off the first five deliveries and, with three needed off the last ball, he drove the ball to long-on, but could run only two.

Peploe was voted man of the match, pipping keeper Davies who followed up his 31 with three good catches.

Morris continued: “Our spinners got all nine wickets, but credit to our seamers [Nugent and Rishton] for the way they bowled to finish off the game.”