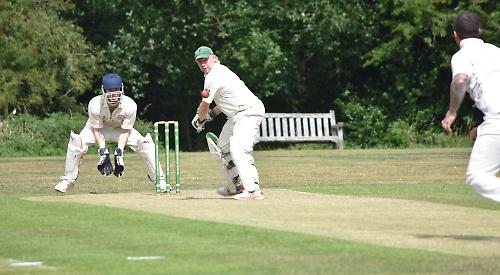 Watts, though, continued to elegantly bestride Peppard Common before eventually falling for a brilliant 128 from 96 balls, the baton being picked up by his son Daniel who made 49. With useful contributions from the middle and lower order, Peppard ended their 45 overs on an imposing 331-7.

The Littlewick reply began in disastrous fashion as Sam Fooks had Peter Dries caught by Tappan at square leg, before Jack Mason-Apps was run out by Mark Price to leave the visitors reeling on 4-2.

Left-arm spinners Connor Lamsdale and Chris Humphreys turned the screw in the middle overs as any hope of Littlewick reaching the target were thwarted, although former Wargrave and Marlow all-rounder Kirk Graham impressed with 74 before he was deceived by an Owen Simmons slower ball.

Daniel Watts (2-20) took two wickets in two balls to hasten the end, and with two Littlewick players unable to bat due to injury, Jason Vaughan-Davies clean bowled Symonds to dismiss the away side for 170.

On a fine batting wicket at the Les Clark Oval, the visitors were only able to post 134-8 in their 35 overs, despite PSR’s young bowling attack gifting them a remarkable 31 wides.

However, that total never looked like being enough, and with Sedgwick finishing on an unbeaten 82, the hosts (137-2) cruised to victory with 14 overs to spare.

Meanwhile, a devastating burst from James Rowson helped PEPPARD STOKE ROW 3RDS complete a fine day for the club as they secured a seven-wicket success at CHECKENDON.

Prashant Khare (71) and Karthik Chitta (43) were among the runs as Checks established a solid platform, but having gone for 19 from his opening two overs, Rowson grabbed four wickets in just 12 balls to end with figures of 4-29 to knock over the home side for 180.

Mikey Hennessy led the Peppard charge with a belligerent 43 from just 18 balls, and with Pradeep Kumar (66, not out) and Sam Kimber (56, not out) showcasing their talents, the visitors cruised to victory with more than 14 overs to spare.