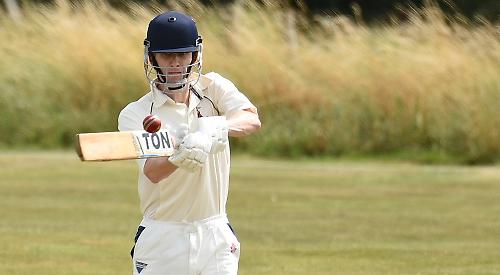 STONOR took the final wicket with two balls remaining to overcome ELMHURST in a friendly match on Sunday.

Ian Cripps (27 runs) and George Jewell (38) setting a platform for the Stonor innings. Then, after rain stopped play for 30 minutes, Marc Lovatt hit 43 runs and declared, posting 151 to chase.

HARPSDEN beat THESPIAN THUNDERERS by 71 runs in a 40-over match on Sunday.

A 100-run partnership between Adam Birkett and Will Stevens anchored Harpsden’s innings before they retired with each making 50 runs. Late hitting from the middle order brought a total of 251-4.

After the fall of two early wickets, Jones (79 runs) and Goldie (28) rebuilt the innings and as the Thunderers reached 111-3, Jones was dismissed by Harry Martin. With the required rate at nearly 10 per over, a miserly 10-over period followed, with Franklin, two wickets for 11 runs, and Khaliq, one wicket for eight runs, kept the scoring low.

Nick Harrison, who took two wickets for 17 runs, and the returning Ed Birkett dismissed the lower order to leave the Thunderers all out for 180, 71 runs short of victory.

WOODCOTE overcame YATELEY by 79 runs in a friendly match on Sunday. Against some useful bowling, Woodcote’s top order performed well, particularly Stefan Gordon, whose hard-hitting 35 formed part of a 50 partnership with Josh Blake. The innings ended on 206 all out.

Woodcote’s slow bowlers took the honours with skipper, James Worsfold taking three wickets for 15 runs and Jonny Aldridge taking two wickets for four runs as Yateley were bowled out for 127.

Local rivals CRAZIES HILL & COCKPOLE GREEN provided the opposition for HURLEY in a 36-over match at Shepherds Lane on Sunday.

Hurley was asked to bat first and the new ball attack of Payne and McCook proved a good test for openers Mike Cole and Yasir Gul, as well as the Crazies’ wicketkeeper Howard Newsome with byes the top scorer in the opening stand of 24.

Cole was undone when the keeper hung on to a sharp chance off McCook and John Munday made a classy 27 runs. Josh Cole held the innings together before falling two runs short of a half-century. A procession of wickets with none of the last seven batsmen reaching double figures saw Hurley slump to 149 all out.

In reply, once Simpson and Tidswell got into their stride, runs began to flow. A skilfully delivered quicker delivery from Liam Cole broke the partnership of 81 in the 11th over. Simpson eventually retired hurt but Tett and Montgomery saw the visitors home.

CHECKENDON fell just short in a run chase leaving EARLEY victorious in their 40-over friendly match on Sunday.

In reply, Checkendon started promisingly with Varikara, in at three, top-scoring with 61. But after he was bowled, there was a collapse with three players out for a duck. Despite a well made 24 from Sharma, Checkendon were all out for 162.

Thorby struck four boundaries in making 56 from 71 balls before he was eventually bowled by Ant Avrili. Peppard looked well placed on 117-4 before the rain came.

Laing played shots all around the wicket as he shared an opening stand of 76. When skipper Fergus Nutt (42 from 33 balls) and Laing fell in consecutive balls to John Rees, Peppard were on 159-4.

But a counter-attacking 41 not out from Scott Harris enabled the Unicorns to post 208-5.

The Ewelme reply started poorly with two quick wickets. Lucas Pugh (27) and Ross Matthews (36) offered some resistance but the away side were restricted to 123-9.

Chris Proudfoot and Nick Windsor gave the Maharajahs a steady start, but it was Lambert (58 retired) and Nathan May (40) which helped their side reach 199.

In reply, Ben Rumble knocked over Sam Kimber and Chris Beeton, with wicket-keeper Windsor then claiming the first of four dismissals. Despite Lewis Beeton’s unbeaten 26, Old Stoke Row ended on 186-9.