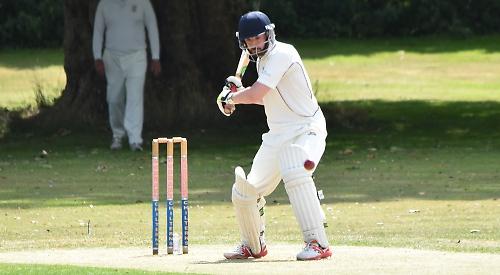 Mo Basharat won the toss and opted to bat first, opening with Pat Hinnell and Mike Cole. The pair progressed well reaching 48 in the 13th over when Hinnell retired hurt with a hamstring strain.

Blair Travis then struck to remove both the Coles — Mike for 32 and Josh for eight — both guilty of hitting the ball in the air.

A 73-run partnership followed between Scott Taylor (34) and father Steve (41). Glen Oliver (5-10) got the much-needed breakthrough, skittling Scott with the score on 139.

Hurley then slumped to 149-7 with both Walton brothers failing to get off the mark and Hamzah Zaman only managing a single. Mubashir Nabi (22) and Mo Basharat (13) staged a recovery to get the score up to 170.

At the fall of the ninth wicket, Hinnell returned with Mike Walton acting as a runner. The last wicket added a valuable 11 runs with debutant Maz Nabi finishing unbeaten on 12 when Hinnell was trapped lbw by Selby.

The Strollers reply got off to a stuttering start with Bob Wall chipping Basharat to Scott Taylor at mid-off in the second over. Two wickets for Taylor saw the visitors struggling at 26-3 with Beale (8) and McDougall (10) both having their furniture re-arranged.

Hamzah Zaman replaced Basharat and struck with his first delivery to remove Low. Selby (42) and Cross (36) got the innings back on track with a partnership of 75 for the fifth wicket. Basharat brought himself back and got the vital wicket of Selby, when the batsman slashed a wide, long-hop into the covers where Steve Taylor pulled off a diving, one-handed catch.

When Oliver called his partner for a risky single, Josh Cole’s direct hit saw Cross yards short of his ground and Hurley were back in the hunt with the visitors still needing 61 from 12 overs with four wickets remaining.

Oliver and Wood put their side within seven runs of victory before Wood chipped a return catch to Basharat. Two deliveries later Travis edged behind and the game was once again in the balance.

A boundary from Salveson brought the visitors to the brink of victory and Cole replaced Steve Taylor.

With three runs or two wickets needed for victory, Cole proceeded to bowl two wides with the batsmen scampering through for the victory off the second.