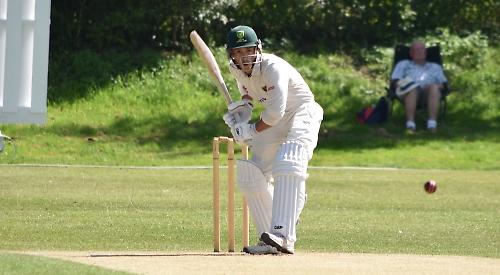 UNBEATEN HENLEY steamrollered DATCHET with a dynamic batting display that left their hosts never in the hunt with the visitors running out winners by a whopping 146 runs during Saturday’s Home Counties Premier League pooled encounter.

Winning the toss Henley elected to bat on what would turn out to be a slow flat deck. With the boundaries invitingly short at the Wally Gage Memorial Ground, a runfest was in prospect and so it turned out to be.

Henley skipper Mike Roberts took the lead and was assertive from the start, pulling former Henley man, Tom Lambert, for four off the first ball to set the tone for an innings which made steady progress until the end of the 14th over when Mike Williams was caught behind with the score on 73.

Joining his skipper at the crease, Jack Davies played himself in as the pair took the score to 103 off 20 overs. The duo then went up through the gears in a stylish and entertaining display of batting that saw balls dispatched to every part of the ground — Roberts, more conventionally with cuts, pulls and drives, whilst Davies pulled out reverse sweeps and cheeky ramp shots. Amongst all the carnage even seasoned campaigners Bobby Sher and Steve Naylor had no answer.

By the end of the 32nd over, as Davies eased past 50, Henley were north of 200. Roberts brought up a commanding century in the 34th over that saw Smithson successively clattered by Davies for four, six and four before Roberts (101 off 115 balls including 14 fours and a six) was caught down the legside.

Richard Morris now joined Davies and gallantly fed the latter the strike as he voraciously devoured a century, driving the hapless Brooks imperiously down the ground for four and then reverse sweeping him for six past backward point. Morris (13 off 11 balls) holed out at deep midwicket but, Davies (139 not out including 19 fours and four sixes) was not finished and propelled Henley inexorably towards the 300 mark which was surpassed with ease as 21 runs (Davies, two sixes and two fours) came from the last over off the hapless Akhtar.

With a mountain to climb, the Datchet openers provided some initial fireworks of their own with 27 runs coming off the first two overs.

Tom Nugent removed Mead in the third over to make it 27-1 which soon became 27-2 when Harry Jordan had Barrett caught behind.

Jordan then had Datchet skipper Sher caught at slip and by the end of the 10th over the hosts were on the ropes on 45-6 and the end beckoned. But as seam gave way to prolonged spin, Naylor and Alldis put together a doughty 52-run partnership which took Datchet past 100.

Thanks to a determined rearguard action by Akhtar and Lambert, the latter determined to salvage some pride from the day, the hosts managed to hold out until the penultimate over when Akhtar was stumped and Datchet bowed to the inevitable.

After the game Henley skipper Mike Roberts said: “It was a really strong performance across the board, with everyone contributing one way or another. Jack Davies was obviously the stand out player of the day — I’m not sure I’ve ever seen a more destructive innings in a Henley shirt.

“Equally important though was the way we executed with the ball and in the field. It’s the kind of ruthless attitude towards competing which continues to epitomise the team.”

• Elsewhere in the division WARGRAVE went down to defeat at WOKINGHAM. Batting first the visitors put on 195-6 before the hosts reached their target of 198-6 from 39.4 overs.