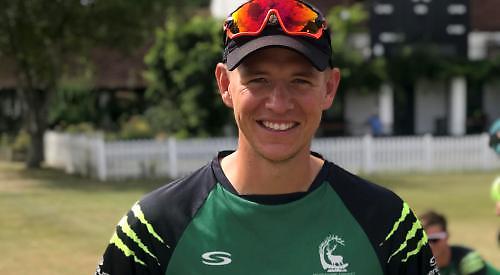 BERKSHIRE defeated a MIDDLESEX side by 44 runs in a 50/50 match played at Old Merchant Taylors School on Sunday, writes Dave Wright.

Both counties included players who also play for the other with Berkshire head coach Tom Lambert also involved in both camps.

Put into bat, Berkshire posted an impressive total of 306 all out in 49.1 overs with Tom Scriven just four runs short of his century when bowled by Wargrave’s Toby Greatwood, who finished with 4-44 off 6.1 overs. Scriven’s 96 came off 75 balls and included four sixes and nine fours.

Wokingham’s Archie Carter made a run-a-ball 51 and shared an opening stand of 114 in 17 overs with Matt Rowe, who scored 38 on his Berkshire debut.

Scriven and Henley Cricket Club colleague Euan Woods (27) put on 89 for the fifth wicket in 13 overs.

Middlesex conceded 44 extras, including 23 wides and 13 leg byes, and that total was to prove the difference between the two sides in the end.

The hosts never looked like winning the game as their top order was tied down by some excellent bowling and fielding and at the halfway stage of their innings they had only 108 runs on the board for the loss of two wickets.

Joe Cracknell, who has made a couple of appearances for Berkshire, and Nathan Fernandes accelerated the run-rate, both reaching half-centuries, but Cracknell was run out by bowler Ali Raja at the non-striker’s end for 58 and Fernandes was bowled by Woods for 52, with Middlesex still requiring 121 off the final 10 overs with six wickets down.

With the National Counties Cricket Association cancelling competi-tions, Lambert has further friendlies lined up, including two more against Middlesex.