New flag raised at cricket club in memory of legend 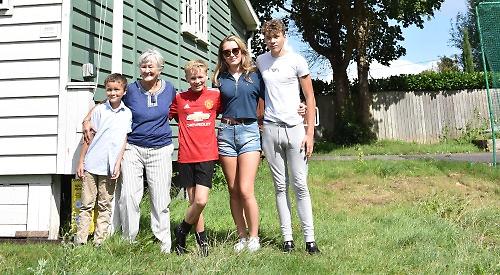 A NEW flag was raised at Henley Cricket Club on Saturday in memory of a club legend.

Friends and family of Paul Bradbury gathered outside the pavilion at the Brakspear Ground, off Matson Drive, before Henley’s match against Finchampstead.

Mr Bradbury died in July last year at the Royal Berkshire Hospital in Reading surrounded by his family. He was 79.

His widow, Gay, donated the flag, which is emblazoned with the club’s logo, having repaired the old one several times in the 20 years it had been there.

Mrs Bradbury was accompanied by four of her seven grandchildren, Gilbert, Jack, Becky and Archer, as she raised the flag up the pole.

“This was Paul’s second home,” said Mrs Bradbury. “We’ve lived in Henley for over 40 years and cricket was always in his blood. This was like his second family.”

She said her husband’s death had left a “big hole”, adding: “We do miss him. We are a close family and we are always talking about him.

“We always think about him when we are here. He would always walk one particular route around the field. He always had the cricket club in his heart. There is also a bench with the family name in the pavilion.”

Mr and Mrs Bradbury moved to Valley Road with their three children in 1979.

He was club chairman from 2006 to 2012, when Henley won the Home Counties Premier League twice.

He also coached Henley Rugby Club’s colts from 1985 to 1988, including one year when they won the Oxfordshire county final.

Club president John Nelson added: “I came down on Friday and saw the flag fluttering strongly in the breeze and I just thought, ‘how appropriate’ because it reminded me of Bradders. It is absolutely wonderful.

“When we see this flag we will all be thinking of Bradders. I know we all miss him terribly and his heart is with us.”

Mr Bradbury’s son Nick said: “The important thing is the memories that people have of him. He was involved so much with the club and we like to focus on the happy times.

“He captained the 1st and 2nd teams and there are three generations of the family that have played for Henley now.

“Mum is still very much involved with the club and that is his legacy.”