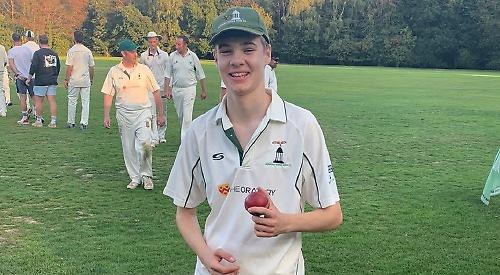 UNDER 15 Jacob Lamsdale took his first ever five-wicket haul for PEPPARD STOKE ROW UNICORNS but they slipped to a four-wicket loss at home to WOODKECKERS on Sunday.

The home side lost a couple of early wickets before Richard Ashton (61) — dropped behind first ball — and Scott Harris (60) shared a useful third-wicket partnership of 121 before they both fell in the 29th over to leave their side 132-4.

Henry Walpole (4-33) then continued to turn the screw as the Unicorns’ middle and lower-orders were unable to accelerate, their side closing 40 overs on 166-7.

The Woodpeckers flew out of the traps in reply as Andy Lavers (81) and Ben Mott (53) sent the ball flying to all parts in smashing their way to 140-0 inside 20 overs.

The ignominy of a 10-wicket defeat loomed large for the Unicorns, but the introduction of Lamsdale sparked a dramatic change in fortunes.

He snared 5-13 from five overs — with three stumpings from Charlie Laing — and with Ruaridh Scott also benefitting from a fine slip catch from Chris Humphreys, the Woodpeckers crashed to 157-6.

However, the away side regained their nerve and edged to victory by reaching 167-6 in the 30th over.

U14 Nick Murdoch continued his magnificent form for PEPPARD STOKE ROW MAHARAJAHS, but they were edged out by three wickets in an entertaining clash against GORING on Sunday.

Peppard lost three wickets early on, but Murdoch (64) and George Lee (25) — who was one of the more elder statesmen in the side despite still remaining an U19 — put the hosts back on track with a fine fourth-wicket partnership of 121.

The Maharajahs continued to attack as skipper Mark Lambert blasted a quick-fire 25 in another blitzkrieg assault to help his side post a competitive 181-7 in their 35 overs, Ben Corbett the pick of the Goring attack with 2-10 in his seven overs.

Max Roberts (3-27) made early inroads into the Goring line-up, but Stuart Baxter (51) and the experienced Jim Warren rescued their outfit from a troublesome position on 7-3 by adding 89 for the fourth wicket.

Toby King, Ben Proudfoot and Aled Roberts were also among the wickets, King adding a run out, but in the end Warren's excellent unbeaten 89 led Goring to victory.

A dramatic late assault from Berkshire U15s captain Oli Sedgwick helped his side avoid a weekend which could have ended with six defeats from six as he engineered a stunning four-wicket triumph for PEPPARD STOKE ROW PANDAS at WHITCHURCH.

On an afternoon when Ben's dad Steve hit 64 at the top of the order, Nick Sedgwick also chipped in with 38 and captain Daniel Watts with 31 to keep the Pandas in the game.

Whitchurch turned the screw in the middle overs, however, and Peppard were left needing 38 from the final 12 balls for victory.

It was at this point that Sedgwick got to work, though, blasting the ball to all parts to end on an unbeaten 55 and help his side to victory with just two balls to spare.