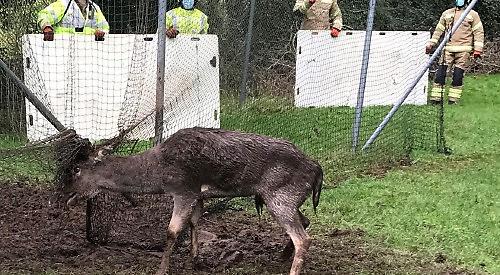 A DEER was rescued after getting its antlers trapped in cricket nets.

The RSPCA and firefighters helped untangle the animal after being called to Harpsden Cricket Club by a concerned walker who spotted the stricken animal.

Andy Eddy, an inspector with the charity, said: “The poor deer was well and truly entangled in the netting and thrashing around in a complete panic.

“Judging by the churned-up mud, he had been there for some time and deer can rapidly go downhill healthwise from stress so it was vital we freed him as soon as possible.

“He was a big animal with large antlers and was kicking out in a panic and I knew additional expert assistance would be needed for this rescue.”

He called the Royal Berkshire Fire and Rescue Service and when the firefighters arrived they used boards to get close to the deer and place a rug over its eyes to calm it down.

They then cut away the netting from its antlers and checked the animal over for injuries. Mr Eddy said: “Luckily, he didn’t seem to have sustained any major injuries from his ordeal, so we gently let him go.

“He stood up and immediately trotted off into the bushes at the back of the cricket pitch.

“My thanks go to the fire and rescue team — the outcome for the deer could have been so different but their expertise resulted in a happy ending.”

Meanwhile, 15 firefighters put out a hay blaze in a horse shelter near Harpsden Court, which may have been started deliberately. The owner raised the alarm at about 3pm on Sunday and three fire crews responded.

It took them five minutes to put out the fire but they stayed for another half hour to ensure the blaze didn’t reignite.

The horses were in the field next to the shelter at the time so were not affected.

Michael Clarke, a firefighter at Henley fire station, said: “Unfortunately, this isn’t the first this has happened at this shelter. We believe that it is multiple cases of arson and so does the owner.”