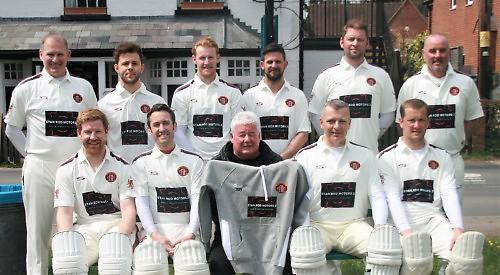 As the hosts slumped to 64-6, having won the toss and elected to bat it looked unlikely that Woodcote would win.

Ryan Van Heerden (32) and Mark Pearson (43) made a good job of steadying the ship, paving the way for skipper James Worsfold (45 not out) to launch a one-man offensive to take the score to 195-8 at the end of 36 overs.

Farley Hill gave themselves a good chance to win the game with an opening partnership of 60 between Weston and Jalil, but their batsmen struggled to accelerate the scoring against accurate bowling from Ryan Van Heerden, James Worsfold and Rakesh Patel.

As the visitors fell behind the run-rate Nicholson, making his league debut for Woodcote, entered the fray. In a devastating spell of left arm bowling, he was twice on a hat-trick ball and his five wickets in as many overs overs paved the way for a 44-run victory. Farley Hill were bowled out four balls remaining, Keanu Brouard mopping-up with 2-5 in 1.2 overs.

Under 17 paceman Nathan May was the pick of the hosts’ attack with figures of 4-19 from his seven overs, but with opener Vatsa Kalli (41) providing a solid platform, Damian Atherton then blasted an unbeaten 84 from just 58 balls to lead his side to 178-6 from their 35 overs.

Oratory School duo Daniel Watts and Owen Simmons shared a 55-run stand for the opening wicket in reply, but a mini-collapse left the game in the balance with the hosts 80-4.

Matt Vines top scored with 38, but Shabrin Maujoon (3-32), Takunda Pswariya (2-32) and Atherton (2-22) kept Warfield in contention until Peppard finally scraped over the line with just one ball remaining.

PEPPARD STOKE ROW 3rds slipped to a second consecutive Division 2 West defeat as they went down by 130 runs at FALKLAND DEVELOPMENT.

The Peppard run chase never really got going as Mike Hennessy top scored with 28, and there was little resistance from the lower-order as they were shot out for 93, Alec McCormack (4-19) and Charlie Mabbatt (4-25) doing the majority of the damage.

Elsewhere in the division CHECKENDON’S opening home match saw them lose an hour to rain at the start but they soon made up for the delay by amassing 292-4 in their reduced innings of 34 overs against WELFORD PARK 2nds.

John Acland-Hood and Prashant Karne put together 117 for the first wicket in 14 overs. Prashat’s 53 took only 43 balls whilst Acland-Hood went on to hit 103 from 70.

The middle order kept up with the tempo with Piyush Redi striking 10 powerful fours in his 55.

Welford Park were left praying for further rain but had to play out their allotted overs as Checkendon captain Sahtia Jobe returned a quick spell of fives overs, three maidens, taking 3-6.

The visitors ultimately succumbed by a margin of 210 runs.