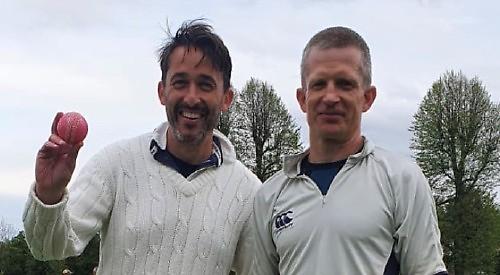 STONOR’S Dave Connolly took a five-wicket haul for the second successive match on Sunday but it wasn’t enough as his side fell short at LITTLE MARLOW.

The home side started their innings with a six over square leg and continued cantering along before the breakthrough came, a run out by the substitute fielder, Dave’s 11-year-old son Henry Connolly calmly throwing to the bowler’s end from point.

The dangerous Anwar Mahmood was caught behind off Mark Tinsey for a quickfire 33 and Arfan Sharif trapped leg before wicket for a duck to leave them 42-3.

A hundred partnership followed between Hassan Farooq (60) and Andrew St Maur (48), who held the innings together, simmering along through tight spells from Chris Maidlow and James Lambert.

Connolly was thrown the ball at the 26th over and soon got into his flow — Farooq was caught by Lovatt, St Maur, Ahmed-Khan and Murali all bowled attempting big shots while Bellamkonda was smartly caught and bowled. The last wicket fell for 191, Connolly running out the non-striker after a dropped catch to complete his extraordinary performance with figures of 5-47.

Connolly’s 10 wickets in two games came in stark contrast to his previous 12 seasons which saw him take just four wickets.

Farr accumulated 49 before chipping Ahmed-Khan to long-on and Stonor were 95-1 in the 27th over.

Noel Williams (22) immediately opened his shoulders and sent two straight sixes into the neighbouring football pitch. Austin (59 not out) took his lead and accelerated quickly, sweeping and driving strongly.

Nick Horne (19) dealt some lusty blows to take Stonor close but they fell just short at 175-3.

Max Roberts made an early breakthrough for the home side at the Les Clark Oval, but Rob Simmons (79) and Young (100) then shared a big second-wicket partnership to put their side in control.

U15 Harry Harper was the star turn in the Maharajahs attack, ending with figures of 4-30 from his seven overs.

However, Nettlebed’s total of 240-6 in 35 overs was always going to be a challenging one for the youthful Peppard to chase, and despite the best efforts of teenager Ben Proudfoot (29 not out), they could only reach 147-8 in reply.

HURLEY’S Sunday side kept up their unbeaten start to the season with a draw against BINFIELD at Shepherds Lane.

The visitors won the toss and opted to bat first. Skipper Mo Basharat opened the attack for Hurley and struck with his fifth delivery as Tom Harvey sliced a wide delivery to cover where Hamzah Zaman beat Mandeep to the catch.

The batsmen found runs hard to come by but Matt Humphrey (49) and Isaac Humphrey (60 not out) set about building an innings, with Matt playing the major role until he was dismissed by Joe Graham with the score on 66 in the 19th over.

Chris Morgan (25) added 41 for the third wicket before falling to a long-hop from Bert Simon which should have been dispatched out of the ground but went straight to Josh Cole on the mid-wicket boundary.

Zaman returned to claim the scalp of Stephen Nower, caught by Graham running backwards at point. An unbeaten partnership between Issac Humphrey and Tom Nower (50 not out) took Binfield to a tea-time declaration on 201-4.

The Hurley reply also struggled to get the scoreboard moving, reaching 17 in the eighth over when Pat Hinnell (three) chipped a delivery from Matt Potter over the bowler’s head and set off for an overly optimistic single and was run out by several yards.

Yasir Gul only faced one ball, a swinging delivery from Kali-Ann Docherty that took a little bat, a little bit of pad and a lot of the stumps to leave Hurley floundering on 17-2 after nine overs. Josh Cole (46) added 38 for the third wicket with Shoaib Kayani (22). Kayani fell to Steve Andrews, edging to the keeper with the score on 55 in the 17th over. After taking a few deliveries to get his eye in, Mandeep Singh launched an assault on the bowling, scoring four consecutive boundaries off Hesketh, including a massive six.

Cole and Singh put Hurley in a good position, needing 96 to win from the last 20 overs. Tom Nower was brought on to try and stem the run rate, which he did, starting with a wicket-maiden to get rid of Cole.

Zaman was run out without facing a ball and Hurley found themselves needing another 89 to win from 17 overs.

Joe Graham (14) joined Singh and kept up the pressure on the bowlers before becoming Nower’s second victim at 154-6.

It was now a case of whether Singh could bat with the tail to take Hurley to victory, but the return of Zoe Docherty put paid to that, having Singh caught at point of the first delivery of her second spell.

With seven overs remaining Liam Cole (one) was bowled off his pads by Kali-Ann, but this was the last success for Binfield as Bert Simon (one not out) and Mike Walton (five not out) saw out the remaining overs without alarm to save the match.

HAMBLEDEN went down to a four wicket defeat at BRADENHAM.

The runs dried up with just a further five added by the 11th over. Liam Davies replaced Ruban and had Sanders caught behind by Jack Savage on 13. Ian McDonough joined Reading, scoring 11 before being bowled by Mike Davies, Davies having already bowled Reading on 16.

The next partnership of Adam Richards and David Saint lasted three overs, Richards scoring nine runs, surviving a catch at mid-on before losing his wicket to Phil Roberts who replaced Liam Davies. Ash and Sid Chignall bowled without reward while Saint and new partner Simon Murton took 45 runs off the next 10 overs. Saint’s wicket fell when he was caught by Julius Pearce at backward point on nine off Callum Farrar-Hockley who finally dismissed Murton on 56 caught by Ruban at mid-on.

With seven overs left and the score 138-6, a target of 160 looked possible, until the wickets of Arnold (six) and James Grant (seven) fell to Steve Rae and Pearce in successive overs. Paul Richards (one not out) and Graham Jackson (two not out) survived the last four overs, Hambleden finishing on 151-9.

At 15-3 off five overs Hambleden hopes of victory were high, but Ash and Niro proved much harder to dislodge, achieving a partnership of 48. Niro was bowled by McDonough on 16 in the 16th over, while Ash went on to hit 30 before being caught at extra cover by Murton off McDonough. This ended a 52-run partnership with Liam Davies who went on to score 54 not out.

Murton took a second catch at deep extra cover off the bowling of Reading to dismiss Mike Davies on three. Bradenham were now 130-6, needing 22 runs from 17 overs to win.

Pearce (19 not out) and Liam Davies hit the target in the next five overs to give Bradenham victory by four wickets.

A strong visiting HETAROI side reached 226-2 in just 39 overs at CHECKENDON on Sunday.

Opener Mike Pennington batted throughout for an undefeated 68 and shared a 106-run second wicket partnership with Karim Pal, who hit 63.

The Checkendon reply began disastrously against good quality seam and swing from Henry Wilman and Will Fryer who took three wickets apiece at minimal cost.

The home team collapsed to 43-8 before a partial recovery from youthful trio Harry Wickens, Sudeu Sunil and Jonny Jackson.

An unlikely draw came into sight before the run out of top scorer Wickens at 25 brought victory for the visitors by a wide margin of 143 runs.

GREYS GREEN’S clash with ISIS was eventually abandoned due to rain.

In reply, Greys Green were on 87-4 after 28 overs when rain stopped play.