Mcgrath wraps up victory for villagers 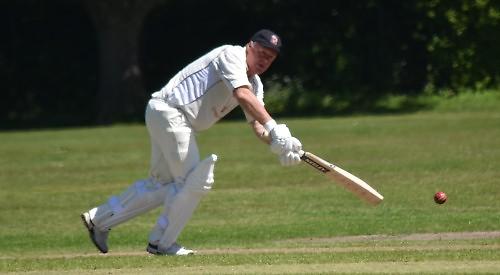 JACOB Lamsdale starred with bat and ball, but PEPPARD STOKE ROW UNICORNS were beaten by six wickets at home to HOLYPORT in their Sunday friendly.

Daniel Watts (69) and Adam Lotery set a solid platform for the hosts after they won the toss, and while there were no significant contributions from the middle order, Lamsdale’s unbeaten 45 from 39 balls helped his side to a defendable 200-5 from their 40 overs.

The away side were equally circumspect in their initial approach, reaching the 20-over drinks break on 96-0.

However, the introduction of Lamsdale (3-38) bore fruit immediately as he bowled Peter Price, had Chris Smith stumped and then benefitted from an over-the-shoulder one-handed catch from his father Peter to account for Maqsood Khan.

Amaad Ahmed (111) kept the visitors on track and while he was eventually run out, Fayaz Ahmed’s unbeaten 46 led his side home with 10 deliveries to spare.

Captain Mark Lambert played a pivotal role in helping PEPPARD STOKE ROW MAHARAJAHS to a first win of the season as they edged out hosts MORETON by one wicket.

Youngster Max Roberts (2-34) made a couple of key breakthroughs as he accounted for Cian Tappan and Tom MacDonald — the latter unfortunate to play on — before Mike Howat’s 54 helped his side post a useful 177-5 from their 30 overs.

MacDonald (2-14) and Andrew Payne (2-15) made early inroads as the Mahas chased a first victory, but Dave Lambert stepped forward to make 38 to keep his side in the contest.

His brother Mark kept up the charge by blasting a quick-fire half century before retiring, only to have to return to the crease with Peppard reduced to 173-9.

At this stage U15 Harry Harper held his nerve to record an unbeaten four, and Lambert went on to 59 to help the Mahas home with just one ball remaining.

SONNING COMMON VILLAGE, playing their first fixture since September 2019, ran out winners by three runs against BBC CAVERSHAM at Woodcote.

Sonning Common were put into bat and some rusty batting saw them fail to find any rhythm. Only Steve Mcgrath (21) and Markland Tidswell (23) made noteworthy contributions as the villagers collapsed to 98 all out after 23 overs. Wasim was the top bowler for BBC, taking five wickets

BBC Caversham had 62 overs in which to score the 99 required and they soon found themselves in trouble with Mike Cann taking three early wickets as they fell to 2-3.

The match swung in their favour despite tight bowling from Cann and it looked like an early finish. Cann then came back for a second spell taking further wickets and finishing with match figures of 6-7 from his nine overs and this set up a thrilling finish.

Mcgrath finished with a match winning spell that saw him take the last two wickets and Sonning Common sealing an unlikely victory.

Woodcote’s 17-year-old Archie Clark, who made a guest appearance for BBC Caversham, was their star player, scoring 45 runs — half their total — and taking 2-2 in three overs.

After two wet weekends GREYS GREEN finally got their home season underway with a draw in their annual fixture against REFRESHERS.

Having been put into bat Greys Green made a cautious start, losing two wickets early on. With the score on 44, Shafqat was joined by James Knight, playing his first game for a number of years, and the duo shared an unbroken stand of 171.

Shafqat reached his first 100 at Greys in the final over while Knight compiled an accomplished 84 not out.

In reply Refreshers got off to a decent start with opener Thatchin making a rapid 37. They kept up with the required rate thanks to 61 by Gardiner but when he was out the momentum was lost and the loss of some quick wickets meant that they had to cling on for a draw.

Hosts STONOR came off second best against a CRAZIES HILL bowling attack that was on top form.

Kavanagh and Tinsey both bowled accurately with the former finding pace and movement to remove Crazies opener Tett for three. Crazies wobbled and then recovered with Rowlls and Sam Montgomery pushing past 50 before both going in short order to Maidlow and then lbw to Pritchard-Gordon respectively.

Austin removed two in two to leave Crazies looking short of their 150 target before Doug Montgomery found some quick boundaries and some smart push and runs from Ansell edged Crazies to 155-9 despite Tinsey’s accurate throw at one stump to remove Payne at the non strikers end.

Stonor’s response started slowly and then got slower. Jewell was removed after what appeared a good shot only to be caught at second slip via a left hand full diving Lerche-Thomsen with a catch.

Williams attempted to move the score along but was clean bowled by Payne. Tett bowled Horne to leave Stonor on 22-3 which rapidly became 26-7 as McCooke ripped through the middle order in three overs for just two runs. Bowling with pace he dismissed Lovatt and Williams before removing Maidlow via the safe pair of hands of Lerche-Thomsen.

With no let up on line and length Charlie Montgomery bowled Tinsey and Lawrence Walker, normally whipping the ball in for Henley U15s, bagged his first wicket for Crazies, ending Pritchard-Gorden’s stubborn resistance lbw and then dispatching Austin with one that nicked back and removed leg stump. Lambert was last to go, bowled by Ansell with Stonor all out for 50.

CHECKENDON’S visit to TURVILLE PARK followed a familiar script as home captain Ollie Thornton hit 126, including eight sixes, out of a total of 249 in 42 overs.

There was, however, some commendable bowling from Checkendon youngster Suder Sunil, who took 3-42, and Jake Jackson (2-26).

Tommy Ellis proceeded to hold together the visitors’ reply with 53 but, father and son opening bowlers Nick and Charles Henry, took five wickets between them as Checkendon were ultimately dismissed for 97 with four overs remaining.