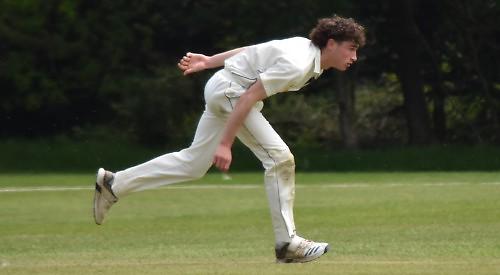 JASON Vaughan-Davies played one of the most extraordinary innings ever seen at Peppard Common to lead PEPPARD STOKE ROW to a seven-wicket victory in their Championship Division clash against BRAYWOOD.

The away side made a convincing start as Syed Kazmi and Yaser Ahmed shared 62 for the first wicket, the stand ended when the former hit Oli Sedgwick to cover.

Terrific work from teenage duo Sedgwick (2-41) and Connor Lamsdale (3-26) reduced Braywood to 136-5, only for Nasser Satti to smash 44 from 19 balls in a fine counter-assault.

Yet with a big score on the cards, another Pepaprd youngster, Owen Simmons (2-38) bowled a fine spell at the death to restrict their opponents to 242-9 in their 45 overs.

After being reduced to
22-2, the experienced Andy Watts (34) and skipper Dan Hayden led the fightback before the veteran was forced to retire hurt.

Hayden’s fine innings was ended when he was run out for 61 to leave his side on 144-3, but what followed will live long in the memory.

Assisted by Mark Price, Vaughan-Davies played himself in on seven from 14 balls, only to then blast eight boundaries and seven maximums as his unbeaten 86 from just 35 balls helped his side knock the runs off with five overs to spare — his efforts including a club-record equalling 31 from one Satti over.