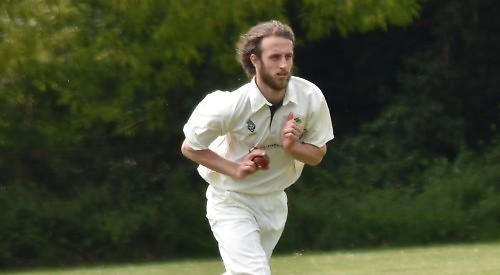 Batting first the home side were bowled out for 162 with Freddy Loveland taking 3-26.

In Division 2B KIDMORE END finally played their first match of the season as they went down to defeat at FINCHAMPSTED 2nds.

However, the other bowlers had an off day with 38 wides being recorded. In between the wides Kidmore bowled well, preventing many scoring shots.

Only Finchampstead skipper Eldridge was able to make a score of any note, 87, as no other batsmen reached 20. Finchampstead finished all out on 220 from 47.5 overs.

Some good pace bowling from Naha and Mohammad, who was well supported by Kite, had some of the top order unsettled for pace and there were a number of loose shots that led to dismissals along with a couple of batsmen who felt aggrieved to be given out. Hearn hit 60 from 60 deliveries but it was all for nothing as Finchampstead ran out winners by 87 runs.

Mandip Sohi top scored with 41 for WARGRAVE 2nds in their Division 4A defeat at WOKINGHAM 3rds.

In Division 4B visitors HARPSDEN ran out 61 run winners in their first match of the season at CHALFONT ST GILES.

Harpsden lost the toss and were inserted on a pitch which looked to offer some assistance to the bowlers.

Openers Birkett and Watson dug in and got the visitors off to a strong start putting on 150 for the first wicket. When Watson (56) fell in the 32nd over Birkett (68) quickly followed leaving the score at 162-2.

The Chalfont bowlers responded well and wickets fell with regularity, only stymied by cameos from Z Jones (23) and Burgess (12). Harpsden finished their 45 overs with a score of 201-9. In response the Harpsden bowlers got off to a shaky start, with both openers erring on line in the first two overs. Both eventually honed in on their length with Aston taking the first Chalfont wicket thanks to a smart catch in the slips.

Some accurate bowling kept the scoring rate down until Stanley was introduced, the 18-year-old left armer finding swing, picking up four quick wickets in the middle overs as the home side looked to catch up with the run rate.

Jones returned for his second spell, taking a wicket in his final over before Franklin and Paice turned the screw, taking the last three wickets as Chalfont were bowled out for 140.

Batting first the hosts put on 198-7 with Rob Kenworthy top scoring with 74 and Ajmal Safi chipping in with 43.

In reply Sean Taylor took 4-32 as the visitors were bowled out for 96.

Home side WARGRAVE 3rds triumphed in their Division 6A clash with HOUNSLOW AND WHITTON 2nds by seven wickets. The visitors, batting first, were bowled out for 80 with Alex Hands taking 4-11. In reply, Wargrave eased to 81-3 with Mark Richards top scoring with 29.

Abhishek Chatterjee top scored for KIDMORE END 2nds as the home side saw off READING 3rds’ challenge by five wickets in Division 7A.

Batting first the home side put on 183-8 off their allotted overs with Kidmore easing to 187-5 from 30 overs. Chatterjee hit 56 whilst Anthony Holland scored 52.

Batting first Callum Briscoll top scored with 64 as the hosts posted 157-9. In reply Yateley closed their innings on 137-7.

Elsewhere in the division, WARGRAVE 4ths lost out at SONNING 3rds by three wickets.

Wargrave, batting first, were bowled out for 96 before the home side reached 97-7 in an innings that saw Joseph Neall take 5-13.

In Division 10A KIDMORE END 4ths went down to a 71 run defeat against EVERSLEY 5ths.