Duo pile on runs as Henley march on 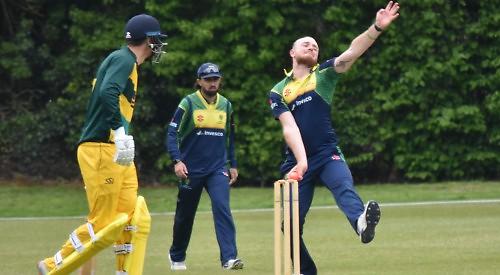 HENLEY recorded their third consecutive win of the campaign and stretched their lead at the top of Division 1 of the Home Counties Premier League to 14 points with a five wicket win against visitors DATCHET last Saturday.

Going into the match Datchet started the day in second place in the table and ended it in third behind High Wycombe, having amassed just six points for their efforts.

In winning the toss and electing to bat on a good wicket, Datchet needed to post a big defendable score in order to have any prospect of winning the game.

By the seventh over, that ambition was severely compromised as they slumped to 14-3.

Under intense pressure from the home side from the off, plenty of playing and missing preceded the first wicket as MCC young cricketer Mead fluffed a pull and played on. He was soon followed by fellow young cricketer Barrett, caught behind, and 13-2 soon became 14-3, Haley caught at slip for a duck.

It was now a time for the visitors to consolidate and avoid losing any more wickets anytime soon which Brookes (another young cricketer) and Dickinson undoubtedly achieved, but at the price of snail-like progress such that when Dickinson (38 off 75 balls) departed, adjudged lbw to Ali Raja, it was over 36 and just 103 runs were on the board.

Miserly bowling and sharp fielding played their part, but the incoming Joe Thomas demonstrated what a more expensive approach could achieve with 59 off 40 balls that included five sixes and put a dent in Tom Nugent’s figures which were more than decent — 10 overs, two maidens, 4-47. After 50 overs Datchet had 216 runs to show for their efforts. This was not nearly enough and soon became apparent, though not before skipper Mike Roberts was out for a duck fourth ball in, and Jack Davies ran himself
out, Akhtar scoring a direct hit with a return throw from the deep.

By the 10th over, Henley were 63 runs to the good and way ahead of the Duckworth Lewis method of scoring which was academic on a fine sunny afternoon.

There was little about the Datchet bowling that perturbed either Tom Scriven, who continued where he had left off the previous week at Buckingham, and Richard Morris, scoring his first Henley runs of the campaign.

Both went onto score 70 apiece and the dismissal of these two owed more to themselves than the opposition. But when Scriven was out, in came the dependable Euan Woods to add 39 runs of 36 balls. Euan Brock cross-batted a four down the ground and it was all over when Dickinson contrived to bowl five wides.

In this format of the game, recording the result as a five wicket win does scant justice to Henley’s dominance, which was such that the job was done with 10 overs — a fifth of the available overs — unbowled.