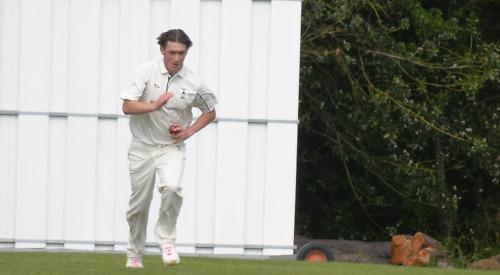 Put into bat on a damp wicket, the game seemed to be progressing well for the visitors as Ryan Lennard (61) and Steve Henderson (27) put on 59 for the first wicket.

Lennard played a fine innings to pass his half century and he was looking likely to get to three figures, but his dismissal with the score at 100-3, instead of providing the basis for a high Woodcote total, saw a complete collapse to 110 all out. Kiran Juluri (4-8) and Andrew Miller (4-35) did most of the damage.

There was nothing wrong with Woodcote’s bowling technique and good performances from four of their bowlers turned the tables. Openers Ryan Van Heerden and Rakesh Patel were almost unplayable for the first 16 overs, after which Twyford were reduced to 45-6.

Rakesh took 2-13 and Van Heerden 4-32 and when they were done Mark Pearson (2-12 in eight overs) and Steve Henderson (1-2 in 3.1 overs) put paid to the remaining batsmen. Twyford were all out for 87 to give Woodcote victory.

U16 James Watts led PEPPARD STOKE ROW 2nds back to winning ways with a match-turning 59 in their 27-run triumph at home to FARLEY HILL in Division 1.

Having lost three early wickets, Rob Simmons and Watts (59) helped steady the hosts’ reply before useful cameos from the lower order helped Peppard post a competitive 181-9 in their 40 overs.

Archie Malcolm and Ruaridh Scott made early inroads to slow the Farley Hill reply, before Owen Ravden (2-29) and Roy Hayden (2-27) turned the screw in the middle overs.

The visitors tried to rally from a difficult position late on, but Peppard held their nerve to keep the Hill to 154-8 in reply.

Mick Chard senior was again the star of the PEPPARD STOKE ROW 3rds’ show, but his side were beaten by 122 runs at a strong SILCHESTER in Division Two 2.

The newly-formed hosts, made up of a number of former Division 1 players, dominated from early on as Usman Ali blasted 72 from 79 balls. Peppard skipper Matt Kimber (2-41) led the visitors’ comeback, but it was Chard who continued to showcase the value of experience with 4-42.

Silchester’s aggressive strokeplay meant they were able to total an intimidating 267-8 from their 40 overs.

The Peppard reply started disastrously as Hugh Asquith and Nick Murdoch departed cheaply, albeit Dave Lambert and Jacob Lamsdale made 30 apiece to lead something of a fightback.

Despite James Rowson again improving his career-best score with an unbeaten 18, Peppard were dismissed for 145.

Elsewhre in the division, CHECKENDON ran out winners at WEST READING 4ths.

Early problems for bowlers adjusting to the pink ball led to the home side reaching 102-1 in 16 overs with Haaris Mushtaq hitting 58. The visitors came back strongly, restricting their hosts to 198-8.

Checkendon suffered an early setback when John Acland-Hood was caught at short third man for eight before Prashat Khare with 37 set the stage for a 127 run third wicket partnership between Matt Heslop — who was undefeated on 69 — and Sunil Varikarra, who was run out with only a single required for victory and six overs remaining.