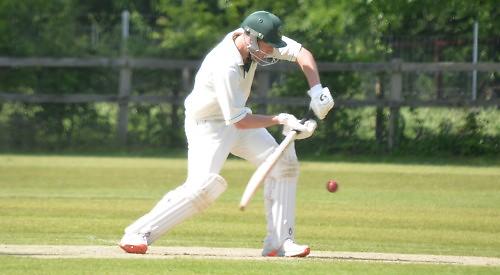 The Henley opening batsman hit 23 fours and four sixes in his 112-ball innings before being out lbw.

Adam Searle, batting at seven, chipped in with a quickfire 96 runs off 61 deliveries as Henley ended their innings on a huge total of
474-8.

In reply Tring were bowled out for 212 with Freddy Loveland taking
4-37 and Cameron Jacobsen 3-48.

KIDMORE END recorded their first Division 2B win of the season as they defeated visitors FLEET by 32 runs.

Fleet won the toss and elected to bat. Kidmore End’s openers Manpreet Singh and Jake Easton got their side off to a good start, scoring runs quickly. Singh hit seven fours and a six in his 39 run innings.

Ben Tegg, in his first league game for the club, came and went quickly bottom edging a pull shot onto his stumps. This saw the Jakes — Leach and Easton — put on 112 for the third wicket.

Leach scored 39 whilst Easton went on to top score with 110 from 125 deliveries in an innings that included 10 fours and five sixes.

Abid ul Wahab scored a quick fire 22 whilst in the last half hour Hearn hit 40 from 24 deliveries as Kidmore closed on 281-6. In reply Fleet never kept up with the required run rate and closed on 249-8 with Ben Phillimore taking 3-49.

WARGRAVE 2nds remain top of Division 4A after they defeated visitors FALKLAND 2nds by 95 runs.

Kieran Lall top scored with 102 for Wargrave as the hosts posted 275-8. In reply Hugh Thomas took 4-32 as Falkland were bowled out for 180. In Division 4B HARPSDEN ran out one wicket winners against visitors COOKHAM DEAN 2nds. Batting first the visitors posted 151-9 with Zac Jones taking 5-31.

In reply, Harpsden reached their target with one wicket in hand, closing on 155-9.

Division 5B league leaders HENLEY 3rds ran out 86 run winners away at PURLEY 2nds. The visitors, batting first, put on 196-6 with Gurung top scoring with 75. In reply the home side were dismissed for 110.

Visitors WARGRAVE 2nds are second in Division 6A following their 155 run win at WINDSOR 2nds. Mark Richards hit 104 for Wargrave who were all out for 207.

In reply, Windsor were skittled out for just 52 runs with Paula Toffolo taking 4-1 and Tom Walker 3-6.

KIDMORE END 3rds are second in Divisoin 9A after defeating visitors SONNING 3rds by 36 runs.

Batting first Kidmroe End put on 192-9 with Nish Rajmohan top scoring with 51. In reply, Sonning ended their innings short of the required target on 156-9.

Elsewhere in the division, WARGRAVE 4th defeated visitors WOKINGHAM 6ths by 85 runs. Wargrave, batting first, were bowled out for 140 before dismissing the visitors for just 55 runs.

KIDMORE END 4ths went down to a nine wicket defeat at NEWBURY 3rds. Batting first the visitors were all out for 149. In reply Newbury eased to 151-1.