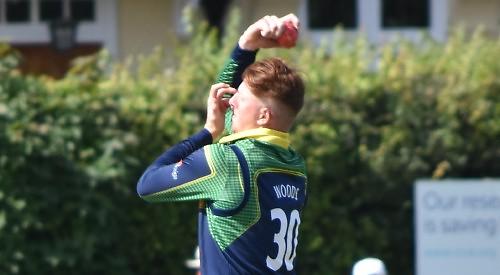 HENLEY maintained their 14 point lead at the top of Division 1 of the Home Counties Premier League with a 109 run win at TRING PARK last Saturday.

If the margin of victory sounds substantial, the bare statistics belie a game which, but for another impressive innings by Matt Dalrymple — 90 off 59 balls, seven fours, seven sixes — might have been a closer-run thing and which papered over the cracks of a batting display that left something to be desired.

On a glorious morning it was a toss to win and bat which Henley did. To judge from the vocal encouragement the players gave each other in the early overs, Tring were clearly up for the contest.

Their noisy enthusiasm, elevated by the first over departure of Henley skipper Mike Roberts, gradually became more muted as Tom Scriven and the incoming Euan Woods imposed themselves for a 55 run partnership until both departed in short order when well set.

Richard Morris played himself in only to depart in a similar fashion to Scriven, caught at mid-on, and with Matt Rowe bowled and Euan Brock under-hitting one to just within mid-wicket boundary, Henley suddenly found themselves at 108-6 in the 28th over. By now, Dalrymple had entered the fray and was finding the range. His first six at the beginning of the 30th over gave a hint of what was to come, before unleashing a barrage in the 31st over that added 19 runs (including two sixes and a four), followed by 25 runs in the next over (including three sixes and a four) that resulted in both Criddle and Clark being taken out of the attack and two lost balls. Stewart Davison provided good support for this pyrotechnic performance. A few slightly calmer overs followed before Dalrymple took down Snookes for another 22 runs as Henley sailed past 200. In nine overs, 108-6 had been transformed into 208-6.

A century beckoned, but it was not to be as Snookes got his revenge, thanks to a catch low down by Jacobs in front of the sight screen at the Town End — the fielder having had to make a lot of ground to get there let alone take the catch and hold on.

Davison underestimated the need for speed and was run out two balls later, but cameo performances from seamers Tom Nugent and Simon Wheeler showed how it was done, the pair adding 40 before both succumbing in successive balls. Henley were all out three balls shy of 50 overs.

The Tring response never really materialised. Increasingly behind the rate from the off, and even allowing for another top bowling and fielding performance, the Tring reply lacked spark and ambition and 53-3 after 20 overs was never going to win them the game.

Tring meandered on, but off-spinner Matt Rowe was on hand to put everyone out of their misery with a scintillating 6-20 in 6.3 overs, pick of the bunch being the eighth wicket of Criddle, featuring a one-handed diving catch by Nugent at mid-off. The match was all over with 5.3 overs to spare.