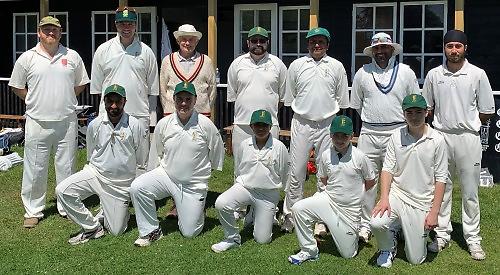 Strolling Optimists won the toss and batted first and were down to 21-3 after seven overs.

Good counter-attacking from Thorne (65), Stananaught (23) and Marsh (23) turned the tide for the visitors.

Greys Green kept plugging away, with Singh bowling a marathon 13-over spell, picking up two wickets as well as causing a run out, following a good throw from Jenkins.

Newing (44) added some fireworks at the end to take Strolling Optimists to 190 all out.

In reply, Greys Green raced out of the blocks reaching 120 for no loss after 20 overs.

Ahmed (74) and Shafqat (44 not out) batted well, seizing on any loose deliveries. Harvey took a good catch to dismiss Ahmed and break the 135-run opening stand.

Newing then took two quick wickets to leave Greys wobbling at 172-4. Shafqat stood firm and with Singh (16 not out) sealed victory with a six.

PEPPARD STOKE ROW UNICORNS were edged out by one wicket and with four balls remaining in a hastily-arranged friendly at home to FRIENDS UNITED.

Despite suffering an early setback, Daniel Watts (35) and Adam Lotery (39) set Unicorns on a fair course before a mini-collapse saw them fall from 69-1 to 86-4.

Chris Humphreys (37) provided a useful cameo in the middle order, but after he departed, the Unicorns suffered an implosion which saw them crash from 151-5 to 153 all out and including a pair of run outs.

Jacob Lamsdale (2-35) kept the pressure on, but a fine knock from Sagar Solanki (53 from 57 balls) took the away side to the brink of victory, and they just held their nerve to get over the line.

Mark Harper (52 retired) and U15 Murdoch (50 not out) impressed with the bat as PEPPARD STOKE ROW MAHARAJAHS lost to THEALE AND TILEHURST by nine wickets, though the result belied a contest which was far more even.

Harper and Brandon Murdoch (33) put on 67 for the hosts’ first wicket, and with the latter’s son combining with
t Chris Proudfoot (39), runs continued to flow as the Maharajahs totalled
222-5 from their 40 overs.

Murdoch took the only wicket in the visitors’ reply with the score sat on 85, but James White (107 not out) and Elvis Da Costa (81 not out) combined to take their side to victory with eight balls to spare.

Rudi Derbyshire (30 retired), Jaco Kind (28) and Ethan Day (31 retired) gave the visitors a good start before their innings closed on 139-2.

Will Underhay (2-18) was the pick of the nine-man Peppard attack which kept Falkland to 100-3 in response.

Visitors REGALS proved too strong for a young CHECKENDON team, dismissing them for 118 of which Charles Ellis made 27 and youngsters Jake Jackson and Joseph Bradley 21 each.

Experienced Regals opening batsman Billy was retired after hitting 11 fours in his 63 as the visiting side required only 16.1 overs to reach their target.

A fine innings of 71 from George Rowlls was the difference between CRAZIES HILL and visiting side
ROVING GOATS TOURING TEAM, captained by Sam Montgomery, son of Crazies skipper Doug.

The visitors were put into bat and Ollie Tett soon had Sam Montgomery bowled before Liddle sneaked another Tett delivery to Nick Pritchard Gordon’s gloves behind the stumps.

With Cooke caught at mid-wicket by Dan Hanton of L Walker and Matt Constant removing Ves and Dunne cheaply the Roving Goats were 70-5 and looking well short of posting a winning score.

Rowlls and Building could not be shifted however, with Rowlls passing 50 before Tett returned to clean bowl him and remove Building for 31.

Steve Hanton took the final two wickets as Crazies were set a target of 185.Tett the pick of the bowlers with - 33.

Openers Dan Hanton and Robert Emmerson had been pushed up the order and were adrift against the pace of Wilson and Willis, both returning to the pavilion for nine and four

Hancock provided some resistance before Steve Emmerson and Steve Hanton got the score moving towards 100.

Emmerson was out for 15 off Montgomery and Hanton fell for 23 bowled by Ves. Young Ollie Walker and his brother Lawrence held the Goats at bay ably supported by their father Nick, before Crazies succumbed well short at 109.