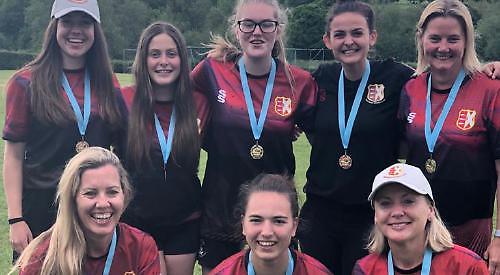 The team joined the league for the first time this year and went undefeated all season against other Berkshire teams including Sonning, Binfield and Cookham Dean.

The villagers went on to continue their winning streak against Beaconsfield and then with an
81-run victory against Luton in the final.

The HCWCL was established in 2019 to promote and encourage participation for women’s cricket clubs based in Berkshire, Bedfordshire, Buckinghamshire, Hertfordshire and Oxfordshire.

Wargrave CC women’s and girls’ coach Neville Wallace said: “Having so much interest in our Ladies Softball section to progress to hardball, the Supa8 competition was the perfect opportunity for players to test the waters.

“Four players in our supa8 squad of 11 joined hardball for the first time, and for them all to step up and win the competition against teams who have been playing for a number of years is a great achievement and shows their spirit and determination.

“As their coach, I am proud of what they have achieved in such a short time.”

Neville heads up the Wargrave women’s and girls’ softball and hardball cricket teams and welcomes new players to come along and learn a new skill.

Newcomer Roisin McMahon, who has recently taken to the sport, added: “Having just taken up softball cricket last year as a complete novice, it was a little daunting to take the step into hardball cricket.

“The Supa8 was the perfect competition to get me started. There is so much support and dedication from the coaches, alongside fantastic team spirit, it makes for a lot of fun.

“It feels incredible to be part of an amazing team of ladies, whose love of cricket shines through on the pitch.”