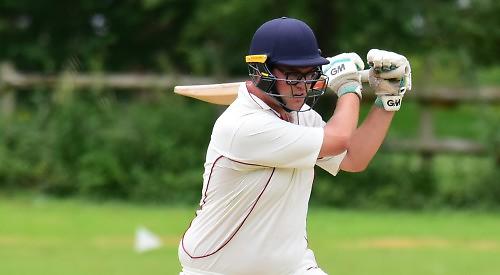 HURLEY went down to a three wicket defeat in their annual fixture against HETAROI at Shepherds Lane.

Mo Basharat won the toss and opted to bat first with Shoaib Kayani and Mubashir Nabi opening the innings for the hosts.

Kayani departed in the first over, edging the first straight delivery of the over from Fergus Neve onto his middle stump. Nabi and debutant Sohaib Nazir pushed the score to 39 in the seventh over before Nabi was trapped in front by Neve.

A middle order collapse as Graham (0), Zaman (1) and Ajmal (1) all departed within the space of 11 deliveries left Hurley floundering on 56-6.

Mike Walton joined Josh Cole, needing two runs to pass the milestone of 11,000 runs for Hurley. This was quickly achieved, and the pair set about rebuilding the innings with a gritty partnership of 57 to get Hurley into treble figures.

Cole (40) eventually fell to Wallis as an attempted drive was sliced to Ball at slip. Batting with the tail, Walton (28 not out) managed to eke the score along to 125 when Basharat declared after 42 overs.

Mike Pennington (5) was was out lbw to Zaman in the seventh over with seven runs on the board. The next 23 overs saw 47 more runs added.

Hurley’s Pat Hinnell (13), playing as a guest for Hetaroi, took 43 deliveries to get off the mark. After lengthy spells from Zaman and Basharat, Liam Cole was brought into the attack and broke the partnership with a quicker delivery that clipped the top of Ball’s off stump.

Hinnell’s marathon vigil was ended by Nigel Haines who also picked up the wicket of Thathapodi (3), caught behind.

Hetaroi skipper Neve looked to introduce some impetus to the innings with 13 off 15 balls but fell to a catch in the deep by Graham off Haines.

With 38 runs required and five wickets in hand, the game was poised. Will Fryer (24 not out) carried on where his skipper left off and took his side to within five runs of victory when Wilson (21) was run out by Cole, the following over saw Ollie Fryer depart for a duck but Milo Abel (5 not out) secured the win for Hetaroi by three wickets with three overs to spare.

Sam Butler (47) and Owen Simmons (44) stood out for visitors NETTLEBED with the bat at CHECKENDON on Sunday enabling their team to reach 187-5 in 35 overs.

Checkendon, by contrast, began disastrously, losing two wickets for five runs in the second over.

A spell of 5-19 from seamer Dan McAllister added to their problems as they were finally dismissed for 105.

A fine spell from Jason Wakelam and another good knock from young James Watts helped PEPPARD STOKE ROW UNICORNS to a tight three-wicket triumph at home to THEALE AND TILEHURST.

U19 Archie Malcolm (1-16) and U15 Tom Mennie (1-14) both bowled probing spells as the Unicorns kept a lid on proceedings early on, only for Matthew Hearn-Phillips (50) and Alec Davidson-Soler (54) to rebuild the visitors’ innings.

Jacob Lamsdale had the latter well caught at long on by Phil Duncan — the returning Zambian making his first appearance in three years — and with Malcolm enacting a stunning run out to remove Hearn-Phillips, the brakes were applied to the Theale effort as Wakelam went on to take 3-19 from his five overs.

Having restricted their opponents to 153-9 in their 40 overs, the Unicorns lost a couple of early wickets before Mennie (27) and Watts (49) seemingly had the game well on track as they moved to 77-2.

A middle-order wobble left the Unicorns on 130-7 before Wakelam and Richard Ashton (24 not out) held their nerve to guide their side to victory with 59 balls to spare.

An unbeaten 78 from teenager Nick Murdoch proved in vain for PEPPARD STOKE ROW MAHARJAHS as they were edged out by three wickets at home to WEEKENDERS.

Having lost a couple of early wickets, Chris Proudfoot and Murdoch tried to give their side a platform, albeit this suffered a second assault when three quick wickets fell.

Murdoch was joined by last-minute call-up Steve Tomlinson (49) who looked to be swinging the game in the favour of the home side, and with Adam Lotery also adding 28, the Mahas posted a competitive 184-7 from their 35 overs.

Chris Douglas proved the pick of the Weekenders’ attack with fine figures of 5-21 from his six overs.

The Weekenders’ reply proved something of a one-man show as Dan Jones made a superb 116 not out, leading his side to victory with nine balls to spare despite the best efforts of Murdoch (2-32) and off-spinner Aled Roberts (2-40).