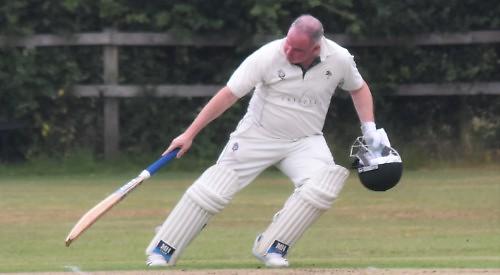 MICK HILDITCH top scored with 94 not out to help Division 2A league leaders HENLEY 2nds to a three-wicket victory at CHESHAM 2nds last Saturday.

Batting first the home side were bowled out for 164 with Cameron Jacobson impressing s with 5-34 while Freddy Loveland took 2-38.

In reply, Henley reached their target in just over 44 overs to wrap up victory on 165-7 with opening batsman Liam Hilditch top scoring with 94 runs in an innings that included 11 fours and a six.

KIDMORE END moved off the foot of the Division 2B table after drawing away at WOKINGHAM 2nds.

The home side, batting first, put on 241-8 from their allotted overs with Ben Tegg top scoring with 83 and Abid Ul Wahab chipping in with 73.

WARGRAVE 2nds were knocked off the top of Division 4A after going down to a 36 run defeat at NEWBURY.

Batting first, the home side were bowled out for 126 with Adit Rajeev taking 5-31 for Wargrave.

In reply, the visitors also found runs hard to come by as they were dismissed for 90 runs.

Division 4B league leaders HARPSDEN eased to a six-wicket victory at TAPLOW 2nds.

The home side, batting first, were bowled out for 204 with Zac Jones taking 4-31.

In reply, Ben Watson top scored with 87 not out while Jones chipped in with 47 as the visitors reached their target of 205-4 from 40.2 overs.

HENLEY 3rds’ Division 5B defeat at home against BOYNE HILL 3rds saw them slip to second place in the table.

Henley skipper Andy Chappell took 6-25 to help his side bowl out for the visitors for 164 runs. In reply, Henley looked to be heading for victory with Adam Lubbock hitting 58 runs but they were bowled out four runs short of victory on 160 to lose their top spot in the table.

WARGRAVE 3rds moved up to third place in Division 6A thanks to a seven wicket home win against EASTCOTE 4ths.

Edward King took 5-20 for the visitors as Eastcote were bowled out for 129. In reply March Richards hit 58 not out as Wargrave reached their target of 131-3 in just 19 overs.

KIDMORE END 2nds ran out 103 run winners at Gallowstree Common in their Division 7A clash with visitors COVE 3rds.

Mark New top scored with 71 while Ben Greenwood hit 50 not out as the home side posted 254-5 from their allotted overs.

In reply, Assad Ulhaq and Tom Branch both took three wickets each as the visitors were bowled out for 151.

KIDMORE END 3rds remain top of Division 9A despite going down to a two wicket defeat at FLEET 3rds.

The visitors, batting first, were bowled out for 119 before the hosts won the match by hitting 122-8. Will Massau-Lake and Mahiman Rathore both took three wickets each for Kidmore End.

Wargrave, batting first, were bowled out for 130 with opening batsman Mayank Gudimetla top scoring with 42.

In reply, Yateley were dismissed for 127 With Kevin Whiteman taking 3-24 and
both Max Meader and
Jamaal Malik taking two wickets each.

KIDMORE END 4ths slumped to the foot of Division 10A after losing out by two wickets at home to BRADFIELD 3rds.

The home side, batting first, ended their allotted overs on 120-8 with Alex Berry top scoring with 46.