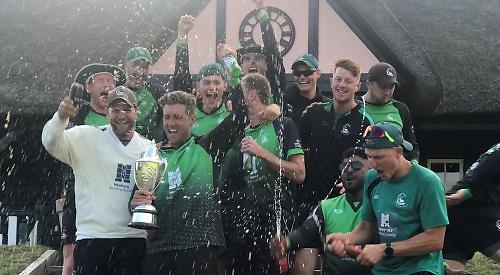 HENLEY batsman Richard Morris led Berkshire to victory in the National Counties Trophy — and then confirmed he had played his last game for them, writes Dave Wright.

And brother James and Chris Peploe also announced they were retiring due to family and work commitments.

The experienced trio finished their county careers on a high with Berkshire winning the 50/50 competition for the sixth time since 2004 by cruising to a 151-run victory over Cumbria at a packed Wormsley Estate ground on Thursday last week.

James had captained the side on previous occasions since being appointed in 2013 but, as he was recovering from knee surgery, he handed over the reins to older brother Richard this year.

Put into bat, Berkshire posted an impressive 260-8 on the back of an excellent knock of 84 off 126 balls from opener Savin Perera and 76 off 88 balls from Toby Albert, the pair sharing a second-wicket stand of 132.

In contrast, Cumbria lost both openers for just two runs and their sixth wicket went down at 31 in 12 overs before they finished up with just 109. They had lost the 2019 final to Berkshire at the same Stokenchurch venue by just one run.

The margin of victory was the biggest in the history of the competition which began in 1983, bettering the 128 runs by which Berkshire defeated Shropshire in the 2013 final, also at Wormsley.

Talking about the retirements, Morris said: “A few us have decided to call it a day due to other commitments, family and work.

“It’s time to pass the baton on to some other people, so there will be a bit of a rebuild at Berkshire. There is a consistent crop of really good young cricketers coming through the county’s pathway and it is time for them to start putting their hands up for some of the leadership positions.”

The pathway is headed by Henley wicketkeeper Stewart Davison, who concentrated on his assistant coaching duties rather than play against Cumbria, handing over the gloves to Slough’s Dan Lincoln.